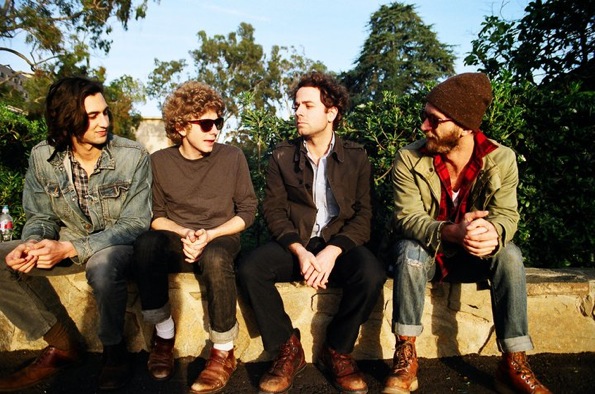 Dawes, an ever-rising four piece rock band from beloved Los Angeles, are touring until the very last day of December. But don’t worry–they’ll be right back on the road in January. Lead singer of Dawes, Taylor Goldsmith, chatted with The Owl Mag’s Hillary Smith about why “Time Spent in Los Angeles” is a must listen, a fight involving a pregnant woman, and how their versatile sound has come about so organically.

The Owl Mag: Your second album Nothing is Wrong was released earlier this year, how would you describe that one in relation to your first album, North Hills?

Taylor Goldsmith: A bit more aggressive and a little shorter I think.

The Owl Mag: What has been the craziest or weirdest thing to happen at one of your gigs?

Taylor Goldsmith: The house sound guy was walking to the stage to move a mic and he bumped into someone’s pregnant girlfriend and almost knocked her over. It ended up with the boyfriend and our sound guy getting in a fist fight in which our sound guy lost and someone from the audience had to take over. We had to stop our song and I was yelling trying to make them stop. And the song we were playing was “Love Is All I Am” which made it pretty funny.

The Owl Mag: Why the name Dawes?

Taylor Goldsmith: Griffin and I are brothers and that’s our grandfather’s name – Dawes Lafayette Goldsmith.

The Owl Mag: Your sounds touch on a couple different genres but always seems to mix well, is this versatile fusion something that was intended?

Taylor Goldsmith: No. We always try real hard to just do what comes naturally. We have no preconceived ideas of what we’re going for or are supposed to sound like.

The Owl Mag: Who have been your favorite artists/bands to tour with?

The Owl Mag: What was the last show you attended?

Taylor Goldsmith: I saw Papa play here in LA and it was a great show. I think they’re a band you’re gonna hear a lot about next year.

The Owl Mag: If you could jam with any musician, dead or alive who would it be?

The Owl Mag: What was the inspiration behind the song “A Little Bit Of Everything?”

Taylor Goldsmith: I was thinking about how often that phrase gets used but to describe completely different things, so once it is taken out of context someone can see it as dark and foreboding or promising and positive when it stands on its own. And I guess using the phrase to show those kinds of different perspectives is all I was trying to do.

The Owl Mag: If you could pick one song off of Nothing is Wrong to be a must-listen, which song would you suggest and why?

Taylor Goldsmith: “Time Spent In Los Angeles”. I feel like the lyrics are getting after what the whole of the record sort of comes together as, and I feel like it’s a good example of us as a band doing our thing too.

The Owl Mag: What are some of your favorite songs to perform off your latest album, and why those?

Taylor Goldsmith: “A Little Bit of Everything” and “Coming Back to a Man Right Now”. I think just because they were written most recently. I’m sure it’ll change like it always does.