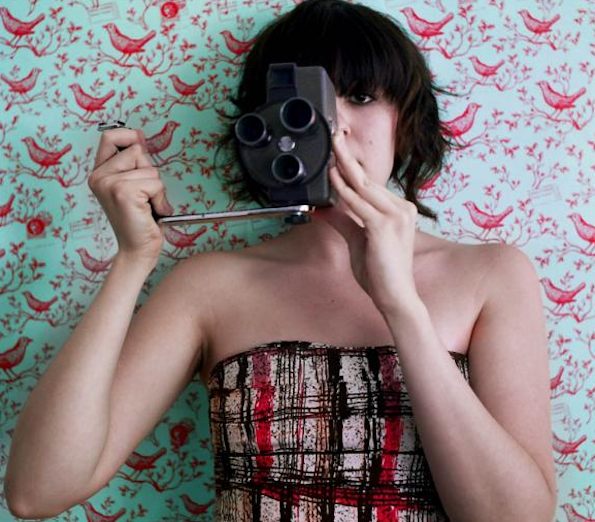 Chloe Roth of Chloe Makes Music is currently one of the most innovative, growing artists that the Bay Area has at the moment. Combining her ethereal voice, dark narratives, and lavish orchestrals, Chloe Makes Music conquers the realm of saccharine folk pop. With the recent release of her debut album, The Puppeteer, Chloe Roth’s progression as an artist is only at the starting line and The Owl Mag is definitely looking forward to seeing where her growth as an artist will take her.

The Owl Mag: What inspired you to start creating music? Was there any particular event or album that triggered your inspiration?

Chloe Roth: I grew up in a very musical family and was encouraged from the start. Well, I guess not everyone was encouraging. There are home videos of me at age three putting to song everything that happened while my five-year-old sister sat next to me saying, “Stop it. Ok stop it now. Stop singing,” so I guess I have been making up long-winded songs since I was little.Â As far as early influences, I grew up listening to the greatest lyricists and harmonizers of my folks’ generation: Simon & Garfunkel, Crosby, Stills, and Nash. I’m a sucker for alliteration, syntax, and rhyme. So those guys, along with contemporary lyrical geniuses like Joanna Newsom, solidify my love for theÂ meditatedÂ manipulation of words. And there I go again!

The Owl Mag: One of the most standout things in your music is the dark lyricism and storytelling. Where do the stories come from, what is your process in writing lyrics?

Chloe Roth: For me, lyrics and harmony rank above all else. Much of my writing is autobiographical or about people I love.Â Sadly, three of the songs on the album are tributes to three young people who passed away in the last few years, all much before their time. Sometimes I’m inspired by an image or an idea completely outside of myself. I wrote “Apollo & Daphne” when I saw Bernini’s eponymous sculpture. The detail, how it is a moment of metamorphosis frozen in time, how the marble is carved so thinly that in places it’s translucent, as when her hair turns to leaves or her feet turn to roots–it floored me. I went to my copy of Ovid’s Metamorphoses, reread the myth, and reworked the language into song.

The Owl Mag: What made you decide to go with Chris Chu for producing The Puppeteer? How did working with him enhance your work?

Chloe Roth: Chris is an old friend from college. Over the last seven years, I’ve watched him transform the Morning Benders from an unknown campus band into one of the most popular bands in the blogosphere headlining at the Fillmore. But more than anything, I just trust his taste and intuition. I’ve been privileged to see him pick up a guitar hundreds of times and take the simplest things a few notches above. I knew that with his vast knowledge and varied influences, he could bring an innovative sound to my stripped-down melodies in a way that would elevate the music while supporting the lyrics.

The Owl Mag: Along with Chu, you’ve also brought in a slew of various musicians to work on the album, why was it important to add some local talent to the mix for the album?

Chloe Roth: The Bay Area is chock full of amazing musicians, and I’m lucky to name a few as my friends. Jen Grady is a beast on the cello–she’s got about ten bands’ worth of songs in her head and performs her compositions flawlessly every time. An old family friend, Noel Jewkes, has been a preeminent jazz horn player in the Bay Area for decades, so it was fun to get him on the clarinet for the klezmer-influenced “Bows & Arrows.” Sara Gambina-Belknap brought banjo and saw to the table, which were both really fun to record. It’s really fascinating, and rewarding, to have other musicians play parts they’ve written especially for your music.

The Owl Mag: How do you feel your work has matured throughout the album making process, compared to your pre-Puppeteer work?

Chloe Roth: I think that because this was my first full-length album and my first time recording at professional studios, I really wanted to make the most of it. I thought, let’s put the whole kit and kaboodle on there–every instrument, a million layered vocals, clapping and snapping and maybe even some jew harp. Chris maintains an eerie calm in the studio, which is really helpful. He also has a very discerning ear. After we recorded guitar, piano, strings, cello, harmonium, saw, accordion, banjo, clarinet, and percussion, I still wanted some glockenspiel. Chris wasn’t into it, but I begged. He finally acquiesced, but said that it was going to hurt his “ears and heart,” which was hilarious (especially because there’s definitely some glock solos on his single, “Excuses”). You’ll have to listen very closely to my record to spot the 10 seconds that it made it in there!

The Owl Mag: The Puppeteer is your debut full length, yet you’ve already gained a fairly decent fan base from playing shows and opening for other bands, do you feel like audiences are becoming more receptive to your live sets?

Chloe Roth: After shows, I get a lot of feedback about my lyrics. And about all the Jewish jokes. You can always expect some stand-up routines between my songs. But musically, my live set is ever evolving. Musicians inevitably come and go and it’s an interesting challenge to rework songs that sound a certain way in my head or on the record to include new instrumentation. I’ve loved working with all the musicians I’ve played with and I’m super psyched about my current lineup.

The Owl Mag: You’re playing a show this Valentines Day at Cafe Du Nord, what can we expect from the show?

Chloe Roth: First of all, I’ve promised that if you don’t arrive with a date, I’ll make sure you leave with one.Â I’m not yet positive just how I’m going to accomplish this, but I do know that there will be a kissing booth at the merch table. As far as who is staffing it, I thought about hiring hookers, but then I remembered that they don’t kiss on the lips. Clearly I’ve learned everything I know about the underbelly of society from Pretty Woman. You can also expect some cheesy love song covers. And if you’re really lucky, maybe even some Boyz II Men!