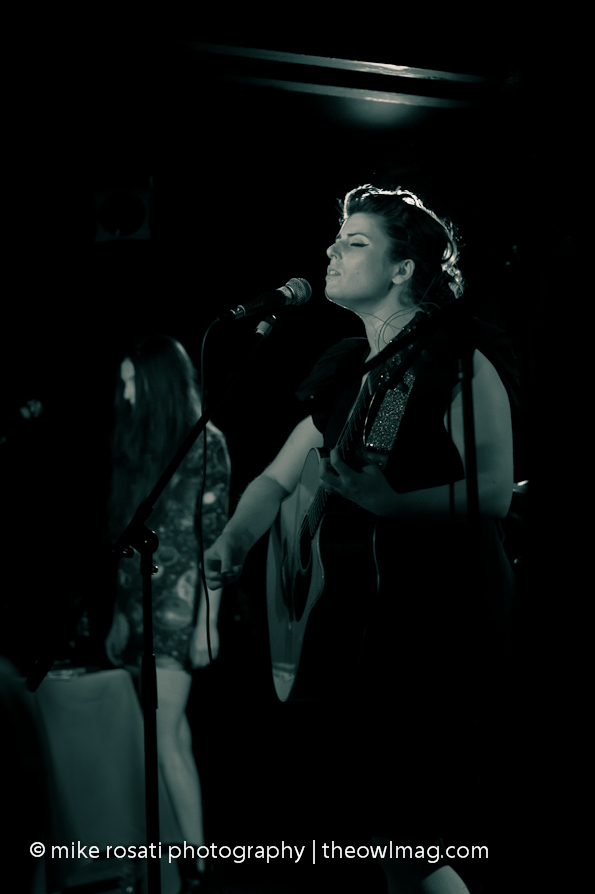 If Carina Round‘s not the hardest working woman in the music business these days, she’s pretty damn close, and she’s no rookie in the game, either. A touring member of Maynard’s Puscifer, the UK-bred and currently LA-based Round has been putting out records and touring the world for nearly a decade on her own. Though Round’s latest self-released album, Tigermending had only hit stores a week prior to her show at Cafe du Nord in San Francisco (her second performance of the day after an earlier solo appearance at an Apple store), it became clear that the album had already struck a chord with this audience as many in the crowd sang along to new songs. We sat down with Round after the show to talk about the ups and downs of defiantly creating an album and tour without a label.

The Owl Mag: Alanis Morisette became famous from her angry song about ex Dave Coulier, or as most people know him, Uncle Joey from Full House and Adele another Brit like yourself, wrote two award-winning albums based on bad exes who came back to claim some kind of ownership for their parts in the makings of her songs. Have you had that experience with someone yet who realized that your songs are about them and confronted you about it?

Carina Round: Well the amazing thing about Tigermending for me is that it’s an incredibly honest record from the get-go, and a couple of the songs are specifically about one person. “The Last Time” is about somebody who indirectly helped write the song. When a song is about somebody, it’s so obvious and so out there that it’s almost like they help you write it. There’s no secret, they don’t even have to ask me.

The Owl Mag: So have you had that conversation with that person about the song?

The Owl Mag: Are there any songs on Tigermending where you thought, “This just isn’t going to work,” when you were writing them and how did you work through it?

Carina Round: There are on that record; one of them is “You Will Be Loved Again,” which is actually one of my favorite songs on the record, as it turns out. That song took probably three years to write and I had the first verse, melody, and the chorus, and I just kept working on it and coming back to it, but I just couldn’t figure it out, I guess. Literally just one day, four years later, it all came into place that I understood what it was about.

“Secret of Drowning” was also like that and took a very long time. I received a backing track from Dave [Stewart] probably five or six years ago that he and Brian Eno had made ten years prior to that so that one is an old one! And he said, “Write something really harrowing and awesome by tomorrow.” I heard the piece and it actually moved me so much that I really did want to write something, but it took me a very long time. I’m not a fast worker that way, and that one took even longer.

The Owl Mag: Okay, so it’s 1 am on a Tuesday night, and you’ve been traveling quite a bit with long days. How do you keep from going totally crazy on tour?

Carina Round: If I really wanted to I would just read Haruki Murakami books and watch movies with Lauren Bacall and old Western movies, or stuff like that; but I mostly don’t. I just go crazy.

The Owl Mag: You’re touring as both a solo act and as a touring member of Puscifer right now, but you’re just doing a West Coast tour for your solo work. Are you going to pick up an East Coast tour in the future, as well?

Carina Round: Well, I’m glad you asked, because I just did this West Coast tour and there’s hopefully going to be more shows on the West Coast. I want to do an East Coast tour and also UK and Europe, but obviously as you know, I’m paying for everything myself: it’s my release, it’s my label, and it’s very expensive to go on tour, especially when you take a band with you. So, I’m hopefully going to launch a Pledge.com page in the next few days that will go specifically to funding a tour.

The Owl Mag: You’re kind of doing something that a lot of artists consider doing in putting out your own album, booking tours, and so on, without a record label. How do you drive that train and keep on track, doing everything on your own?

Carina Round: I don’t know if we have enough time to go into that! I just have to say that I have a manager helping me, it’s not just me. She does a hell of a lot of that side of it. We help each other out, but there’s only two of us. If I decided just to be an artist and just do that, I could fill every minute of every day with that without having enough time. It’s not what I naturally do well, the kind of administrative organizational side of what it entails to be an artist going on tour. On the other hand, I also don’t have what it takes to deal with a hundred people with their heads up their asses, covered in red tape, not being able to figure out what’s going on, which is being signed to a major label.

When it comes down to it, it takes a lot longer to do what I’m doing the way I’m doing it now, but it’s so much more rewarding. Just one person saying to me, “I love this record and it means so much me,” is so important to me. Every single step and second of this record is so personal to me and so important to me, and one mistake can be so horrible. So when one person says “This changed my life,” or “This is so great,” or “I love this song,” you know, it means so much more to me now.

All photos by: Mike Rosati