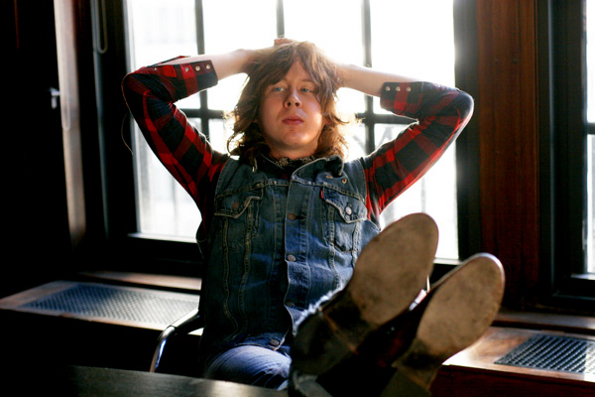 Ben Kweller, the indie rock artist who spans genres (whether it’s pop or country) and has hair eerily similar to that of Shaun White, is back with a new album after a three year hiatus. Go Fly a Kite is not only unique in its throwback to earlier Kweller sounds, but also that it is the first produced on his own label, The Noise Company. He is now on a West Coast tour, bringing his music and witty personality with him. We chatted on the phone with Kweller to get all the details on his new label, album, and upcoming tour.

The Owl Mag: This is your first album from The Noise Company. What has it been like making music on your own label?

Ben Kweller: Well it’s actually been awesome because I feel totally free. It’s just a great feeling. I feel really lucky though. I’ve worked with great people at ATO Records, but at the end of the day they’re the one calling the shots on things like marketing and spending money. Sometimes as an artist you come up with ideas that business people think are really weird and crazy. We [The Noise Company] can actually look into into it and see if we can pull it off. As far as the creative process, that hasn’t changed. I’ve always had creative control. It’s more just the business side of stuff that is a lot easier and transparent.

The Owl Mag: Go Fly a Kite seems to go back to your Sha Sha roots. What’s the inspiration behind the new album? How does it stand out from your other albums?

Ben Kweller: A lot of people have been saying that to me, that it reminds them of the Sha Sha days. I think that’s really sweet to hear, but it really wasn’t intentional. I think maybe whenever I go into the studio I try to do something I’ve never done before and make a really compelling album. I’ve taken a bunch offside roads on the way, whether it’s instruments or just changing courses, so maybe it’s just because over time I’ve experimented a lot. With this album everybody’s like, “Oh my God, he’s back doing his old school thing.” But that Sha Sha vibe has never left me. When I made Changing Horses everybody said, “Oh my God where did this come from? Why did you wake up and decide to make a country record?” But I didn’t all of a sudden decide that. I’ve been writing these songs for 13 years and then there were enough country songs to make a country album. There are so many different sides to me; my records aren’t enough to express who I am. As an artist, it’s kind of hard to make a point of who you are.

The Owl Mag: Which artists have influenced your music?

Ben Kweller: That’s another kind of interesting question because early on as a kid and as a young songwriter I was influenced by other musicians, but eventually you kind of come into your own. You develop your own sound and style of writing. Around the time of Sha Sha I moved to New York and my music got really personal. That’s when I stopped being inspired by other musicians and started being inspired by life. There are bands that I love, but I don’t think it really affects my music. I will say as a kid my favorite bands were The Beatles, Nirvana, Sonic Youth, Caveman, Bruce Springsteen, and Tom Petty. I’m sure a lot of those have influenced me, the music you listen to as a kid kind of makes you who you are. I like Yuck, The Dig, Arcade Fire, Bright Eyes, and Mason Jennings, but I don’t want to sound like them.

The Owl Mag: How was this album been affected by your relocation from New York City back to Texas?

Ben Kweller: I think that it has affected my life immensely. It’s so much easier to live there [Austin] than New York City, and I’m a dad now which is a funny thing to say, but it’s the truth. Raising a family in Austin is just so awesome, there’s so much to do for kids. And it’s a great music and family town. It’s the first time I’ve ever lived somewhere where I can say to a friend, “I’ll be there in ten minutes” and actually be there in ten minutes.

The Owl Mag: The album art is also really unique; what’s the story behind the cover?

Ben Kweller: There’s this great design company in Austin. We try to do everything locally whether it’s designers, t-shirt makers, or engineers. They presented us with like 20 different album packages. They were all super cool. The diorama was our favorite and also the most ambitious to pull off. If I presented that idea to ATO Records they would say, “dude, your fucking crazy.” But I’ve never made money off record sales before so I’m like, “I don’t give a fuck if I make money off it.” It’s more expensive but totally worth it. I wanted to make a piece of art.

The Owl Mag: What are you looking forward to about San Francisco?

Ben Kweller: San Francisco is fucking awesome. I was born there. And the Great American Music Hall is in my top 5 favorite venues in the country.

The Owl Mag: What about Seattle?

Ben Kweller: In Seattle I’m looking forward to going to go to the Japanese food market and buying a bunch of weird foods for the bus. I want to get a bunch of nattō, which are fermented soy beans. I first had it at the Fuji Rock Festival in Japan. They had an American buffet and a Japanese one. Everybody else was eating at the American one, but me, I’m crazy. I tried it and it was the most horrible thing I’ve ever put in my mouth. It made me so mad that I didn’t like it I was like, “holy fuck I hate that I hate it. I’m gonna make myself love it.” Now it’s one of my favorite foods. Pregnant women eat a lot of it because it helps develop a child’s brain. It’s brain food. They totally have it in Seattle, and it’s hard to find.

The Owl Mag: Can you share some fun tour stories with us?

Ben Kweller: I instantly start thinking of the bad stuff, like doing cocaine with Marilyn Manson when I was 16 years old, but we don’t need to go into all of that. I think my best memories are playing with really cool bands. Touring with The Strokes was always really fun, I loved watching them every night. One night I was at a party in LA and Joe Strummer from The Clash and Tom Petty were there and we were sitting around in the living room of a hotel. We all played songs for each other. I remember Tom Petty played “Asshole” by Beck and I was like, “Holy fuck! That’s the coolest.” And then Joe Strummer played the chorus of “London Calling” then stood up and threw the guitar to me. So yeah, Joe Strummer threw me a guitar once.

The Owl Mag: What should we expect next from you and The Noise Company?

Ben Kweller: I’ve been writing a bunch of songs; I don’t really know what kind of record the next one will be. There are a few bands I’m into. We might put out a couple albums, but I want to take it slow; we don’t want to sign a bunch of bands then go out of business. We’re going to take our time and make smart decisions. It’s a really tough business, now more than ever. Our primary goal is to play, distribute, and release my music. Once we get to the point where we can help people out we definitely want to.

You can stream Go Fly A Kite by clicking here.