If you’ve switched on your local alternative radio station or kept up with the blogosphere in the past six months, you’ve probably come across “Safe And Sound,” an uplifting track rife with catchy melodies and lyrics teeming with optimism amidst falling skies and troubled times. Sebu Simonian and Ryan Merchant are the creative forces behind Capital Cities, a Los Angeles-based alt-dance band that has been quickly gaining momentum and notoriety since penning a record deal with Capitol Records in December 2012. 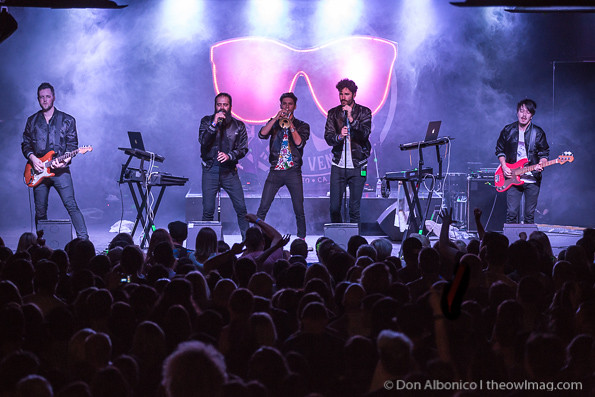 From an outside perspective, Capital Cities has experienced the ultimate Cinderella story: a self-produced band self-releasing an EP in June of 2011 only to be signed by a major label eighteen months later. What is less apparent is what Capital Cities was doing during that eighteen month time period from the completion of their self-titled EP to getting signed with Capitol Records. “We were basically just hustling non-stop. We were putting out cover songs and putting out tracks every once in a while just to keep it fresh to keep the buzz going,” says Merchant. The buzz on the internet began to build and once that ball got rolling, Capital Cities capitalized on the buzz and strategically used it to their advantage. “As blogs would write about us, we would stay in touch with them, and we’d be on Google every single day so knew where people were talking about us to make sure we were constantly connecting the dots.” Keeping in mind that Simonian and Merchant previously had a creative partnership in the advertising world for three years, this market-based research makes perfect sense.

As a result of this web-based research-and-release symbiosis, Capital Cities discovered that they were getting a substantial amount of radio airplay in Peru. This discovery spawned not one but two tours to South America. “We realized it’s actually fun to build this up on our own and have our fan base truly be a loyal grassroots fan base,” explains Simonian, “When the label finally came in, all they really needed to do was partner up with us as opposed to take over and develop us. That’s the kind of deal we have with Capitol Records – a joint venture type of deal in which they came in with the belief in our creativity and have given us complete creative control.” The hustle has certainly paid off for Capital Cities. Their spring tour, appropriately named “Dancing With Strangers,” has drawn out a number of enthusiastic fans ready to cut-a-rug from Denver, to Philadelphia, to New York, to Portland the guys were hard-pressed to pick one particular city where the crowds were especially energized, “The audiences have been so receptive and they’ve been consistently good so it’s hard to put my finger on one particular city,” Merchant says diplomatically.

On this particular night, Capital Cities graced Sacramento with another sweat dripping heart pumping show, the band’s second time performing in California’s capital city. Joined by their core group of musicians Nick Merwin (guitar), Manny Quintero (bass), and Spencer Ludwig (trumpet), Capital Cities took to the stage donning their trademark satin varsity jackets in front of a larger-than-life size neon pair of sunglasses. As Merchant previously explained, the band has released a number of cover songs, so it was fitting that they book ended the show’s set list with their renditions of Pink Floyd’s “Breathe” and Madonna’s “Holiday” with a little Sinead O’Connor splashed in the middle. Set up with side-by-side laptops and keyboards, Simonian and Merchant’s sychronicity in vocals and movement was indicative of their chemistry and longstanding creative partnership. Their vocals melded together seamlessly with a surprisingly flawless tonality given the amount of movement and jumping around the guys to on-stage. 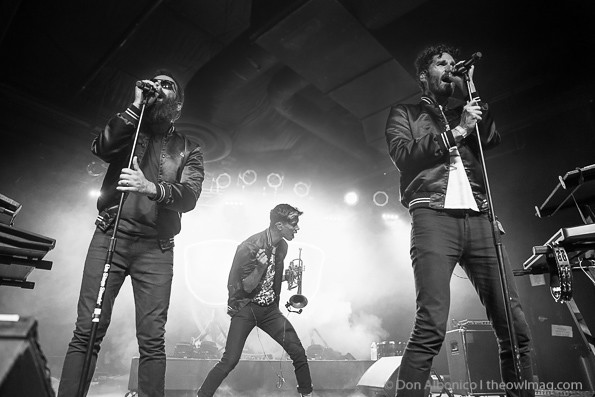 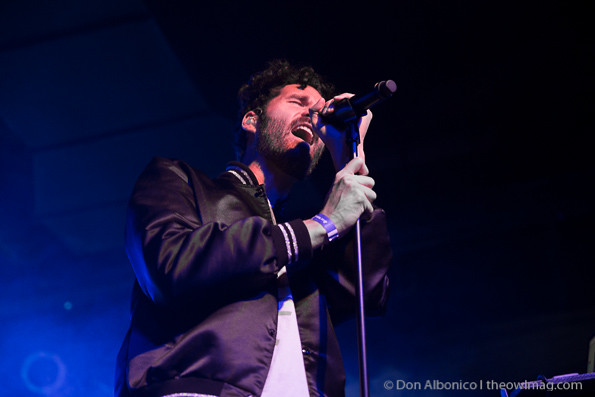 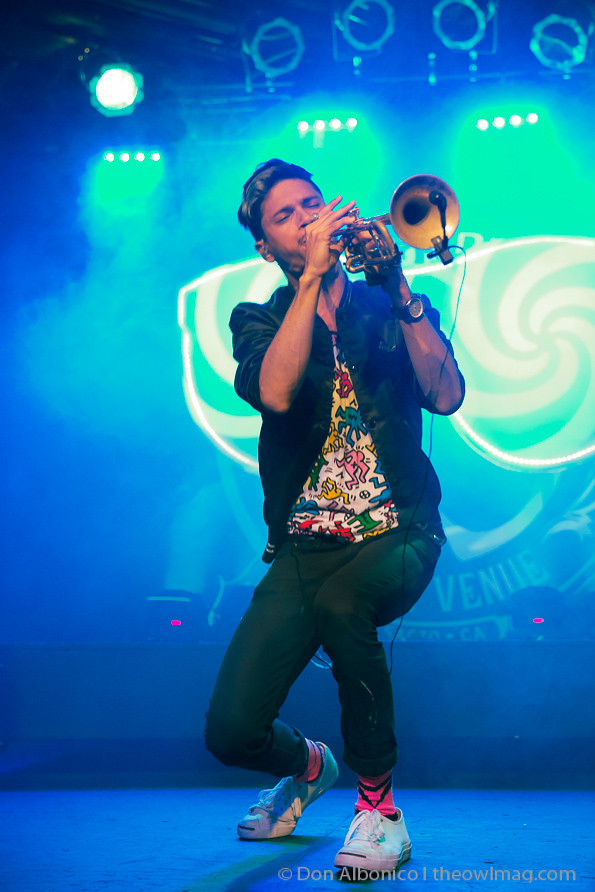 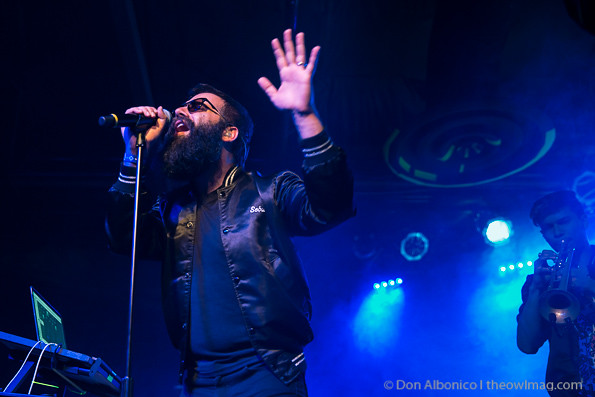 It was almost impossible to stand still during the show and anyone that was standing still was immediately berated by a slightly inebriated yet joyful fan who ordered people to dance. Audience participation played a large role in the show. During their performance of “Chartreuse,” which happens to be Merchant’s favorite song to perform live, arms in the crowd began flailing about and faces were grazed by neighboring hands mimicking Simonian and Merchant’s arm movements during the chorus “color me this way, color me that way, color me inside out, color me upside down.” If you’ve seen the Mandy Moore choreographed video for “Safe and Sound,” you know Simonian and Merchant know how to dance, though they might not have been naturals at first. Their version of the electric slide, called the “Capital Cities shuffle,” was taught to the crowd before diving into “Center Stage,” and as soon as that first four-on-the-floor beat dropped, the entire room was swaying to the beat creating a cool ripple-looking effect in crowd. 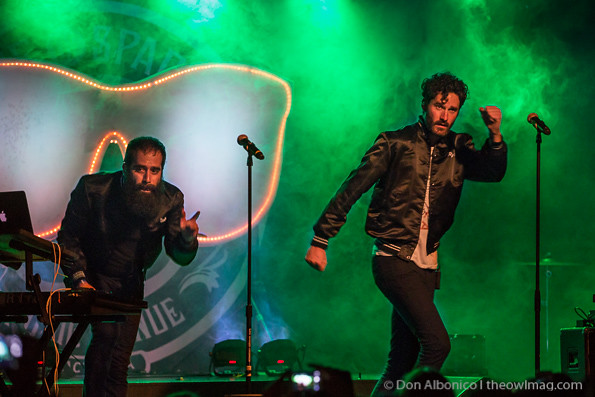 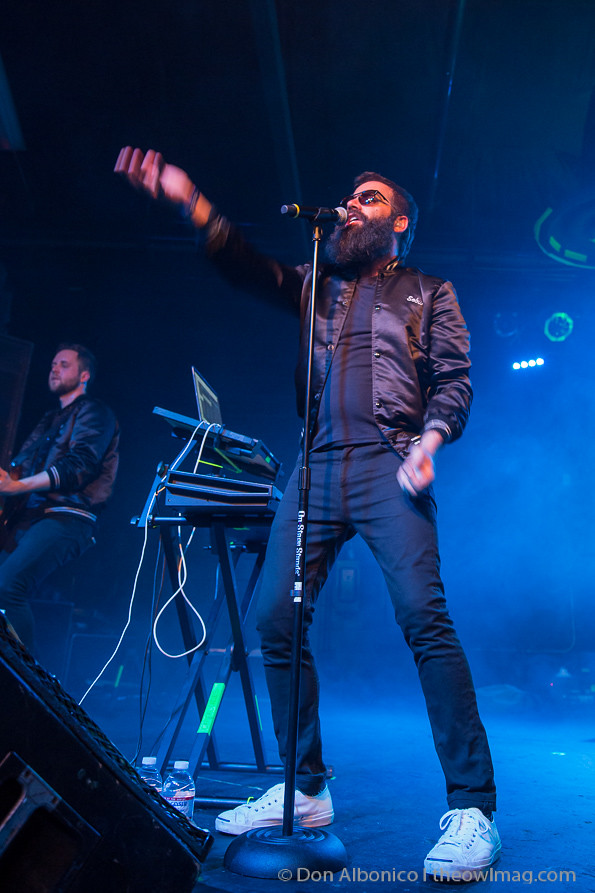 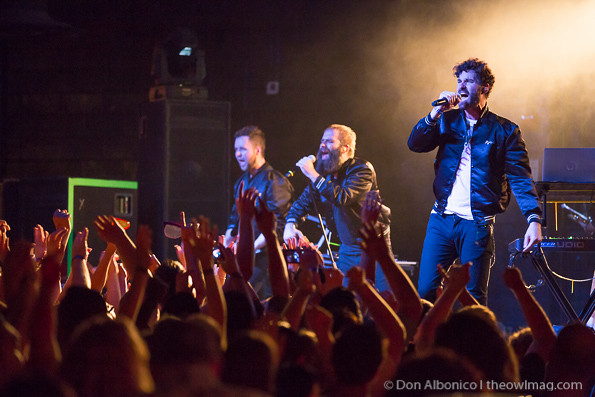 By the end of the show, spirits were high as people exited the venue. Capital Cities will take a little breather from the “Dancing With Strangers” tour in their home base Los Angeles, but expect them back on the road soon continuing the US tour through the end of June. After that, they will set off for Europe and Asia to personally say thank you to their loyal fan base who helped get them to where they’re at today. On November 2nd, they will open for Two Door Cinema Club at Los Angeles’ Greek Theater. Our advice? Don’t miss your opportunity to see them. They put on one hell of a show.

Check out our fun little Q&A we did with the guys at the end of our interview:

The Owl Mag: Favorite song to perform live?
Ryan: “Chartreuse”
Sebu: Good one. Good one. That’s a really good one. Mine is “Staying Alive”

The Owl Mag: Best way to pass time on the road?
Sebu: Eating
Ryan: Taking a walk through the city you’re in

The Owl Mag: Most energized crowd on tour?
Sebu: There’s too many.

The Owl Mag: The first thing you’re going to do when you get back to LA?
Sebu: Sleep
Ryan: Go for a bike ride by the beach