Breaking Out with Phosphene 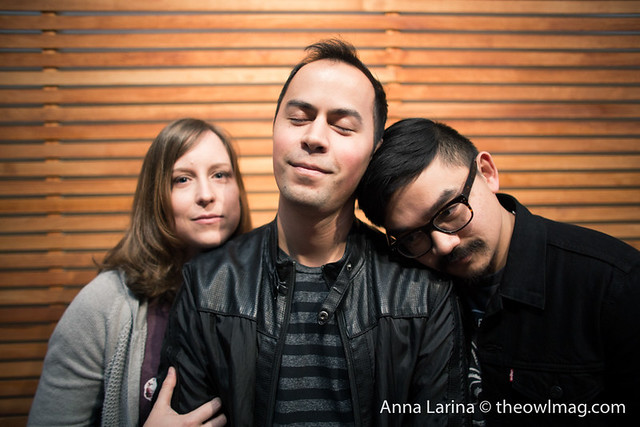 The story of Bay Area-based band Phosphene is a classic story of boy meets girl…meets boy. While attending college in San Francisco, drummer Matt Esteves Hemmerich met singer/guitarist Rachel Frankel in 2010 and began casually playing music together with a couple of friends. Despite their differing musical tastes and backgrounds, the pair quickly developed a very tangible chemistry as they challenged and pushed each other outside of their musical comfort zones.

Shortly thereafter, a fortuitous meeting between strangers while waiting in line for a show at The Fillmore would set the stage for bassist Kevin Kaw’s introduction to Matt and Rachel. “Our meeting was like a rom-com plot line,” Kevin jokes. “Kevin and I showed up super early to this singer-songwriter showcase featuring Matt Berninger and Aaron Dessner [of The National] but the circumstance made for the easiest conversation about music and I ended up inviting Kevin to grab a coffee.” The soft-spoken Kevin left an unsure impression on Rachel and Matt after their first meeting. “It actually took us a while to invite Kevin to play music with us because we weren’t entirely sure whether he liked us or not,” Rachel explains. But after a few sessions playing together, the foundation of Phosphene quickly solidified and the trio found themselves in the studio recording and producing their first record. 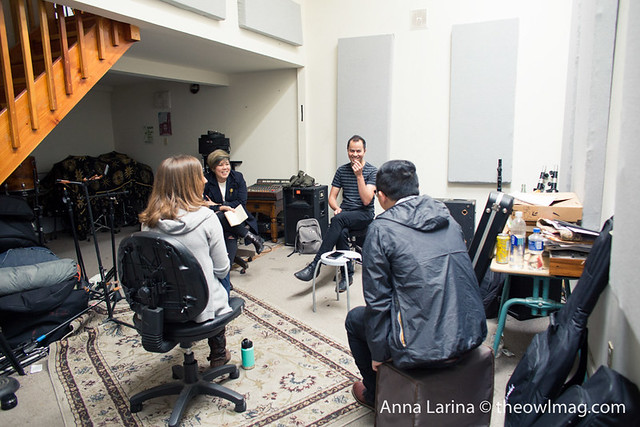 For Phosphene’s debut self-titled record, the band landed at John Vanderslice’s Tiny Telephone studio in San Francisco and learned a tough lesson about the importance of time. “When I was talking with John Vanderslice to book the studio to record, I mentioned that we wanted to record the album in two days and John just laughed and suggested that a week would be more realistic,” Matt says. The band ended up completing nine songs in four days. “What we really underestimated was the time we needed to mix everything and we learned how delicate and involved that process is if you want to have a distinct sound,” Rachel adds. Though the experience recording Phosphene’s self-titled album felt rushed, the fruits of their labor would play an incredibly important role in the future of the band. “That experience laid the groundwork for our approach of doing one song in one day,” Matt explains which gives the band the time they need to record and mix, striking the fine balance of time to work towards a finished product without having too much time to second guess or waffle on decisions they’re making during the process. He aptly compares it to cooking, “It’s like when you’re in the kitchen making something and you don’t have to go anywhere and you keep adding things and adding things and then you’re like, this is AWFUL!”

Perhaps more importantly, the band’s self-titled album opened the door to their relationship with Patrick Brown’s Different Fur studio in San Francisco and their trusted relationship with engineer Sean Paulson who is credited as a co-producer on the band’s forthcoming six song EP titled Breaker. Four months after the release of Phosphene’s self-titled album, the band submitted their work for the highly competitive Converse Rubber Tracks program and were selected out of hundreds to record at Different Fur. “Silver,” which is track two on Breaker, was what Phosphene chose to flesh out with Sean in the studio for Rubber Tracks. It’s apparent that the band has nothing but the greatest admiration and respect for Paulson and instill a great amount of trust in him to articulate details that the band may not otherwise be able to bring to fruition. “It’s kind of the equivalent of closing your eyes and letting your friend put makeup on your face. We were just like ‘Make us beautiful Sean!’” (Matt is quite good at analogies!)

Phosphene found themselves in a new creative dynamic for Breaker, all equally in a songwriting space as opposed to Matt and Rachel having the songs for their self-titled album completely written and “throwing wet noodles as Kevin to see what stuck.” From the beginning stages of conceptualizing a song, the band makes a conscious effort to not weigh themselves down with too much structure to avoid feeling stifled and suffocated. “What we try to keep loose and organic is the very beginnings of a song, the instrumentation, and the riff. When we’ve got a structure molded for two or three parts, Rachel comes up with a melody, I’ll record it, and take the first cut of the lyrics,” Matt explains, “and then Rachel will go over the lyrics and take out the eight syllable words that just don’t work.” When it comes to writing lyrics, Matt and Rachel’s styles are highly complementary, “I’m more straight up and I don’t really dress up my lyrics,” she observes, “Matt tends to kind of make them more abstract in certain parts of the songs.” The trio’s knack for multi-instrumentalism also lends itself to seeing songs from different perspectives and Kevin and Rachel’s abilities to create on the fly leads to spontaneous gems that didn’t previously exist until that moment.

The collection of six songs that comprise Breaker are sonically cohesive and perfectly convey the band’s influences and point of view. Rachel describes “Be Mine” as a “kiss off song about someone who sort of still adores the object of the song, but at the same time also kind of wants to punch them in the face” while lyricly harnessing a self-deprecating tone as she subtly disses herself as one who “still wastes time on fine art.” Kevin’s guitar solo closing the song adds a propulsive element conveying immediacy and decisiveness in sending someone on their merry way.

“Silver,” a song with old beginnings, exemplifies the way Matt can be abstract with Rachel’s melodies providing her with lyrics that conjure up concrete imagery where “grey spells wake inside you.”

With “Hear Me Out,” a song about a relationship on thin ice, the band tried out “The Campfire Test,” an approach that Metric takes during their songwriting process. Matt explains that “it’s an acoustic test where you strip a song back to ensure that your skeleton is strong.” With a strong backbone in place, Kevin was able to weave in dramatic bass lines which were the product of something that naturally progressed over the course of continuing to massage the song.

Visual representations of Phosphenes lyrics are the most readily apparent on “Rogue,” a song about being exhausted on BART while someone misses something that they just lost. The guitars are crisp and piercing and “made me think about trains at a crossing,” Kevin notes. “Rogue” is also surprising in that the vocals opening the song are not Rachel’s, but Kevin and Matt’s brooding tones. “I got this canned wine, called Underwood – I listened to the demo and just started mumbling words, and I felt like I had my guard down…I don’t know that’s probably gonna be me when I’m like 80,” Matt predicts.

“Rogue” and “Ride” were written close together and both possess a Daniel Kessler-esque feel where Rachel plays the outro of the latter song on the top three strings capturing that airy dimension that is so prevalent in Interpol’s guitaring. “Ride” closely ties into the album’s name and concept of breaking away and “burying the old times in the back of your mind.”

“Wild Decay” finds Rachel singing very tongue and cheek lyrics that Matt wrote about a relationship not working out over cheery melodies that make the listener think it may actually be a happy song.  “Sonically, that song is very warm and cheery, but the lyrics are like, fuck this shit!” Frankel proclaims.

The most striking element of Breaker is its ability to capture life through a realistic lens that is equal parts good and bad times while reflecting real human emotion. The story of Phosphene is one of fortuitous meetings between three incredibly talented and humble people. Though the band maintains a low-key persona in the Bay Area, Phosphene is on the brink of breaking out and making people fall in love with what they have to say. Breaker will be released on Friday April 29th through the band’s website. 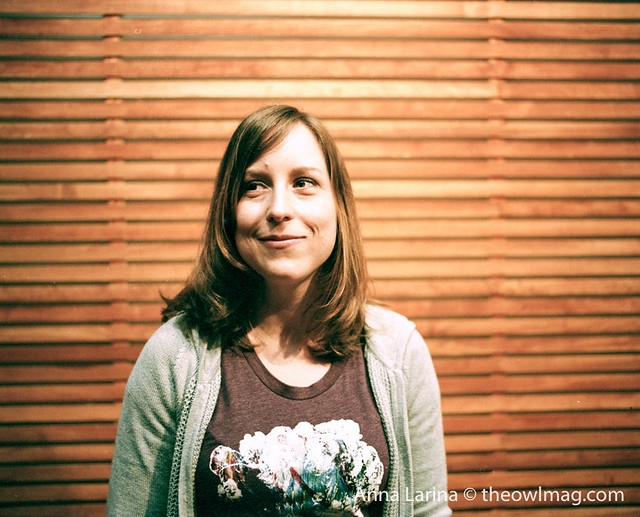 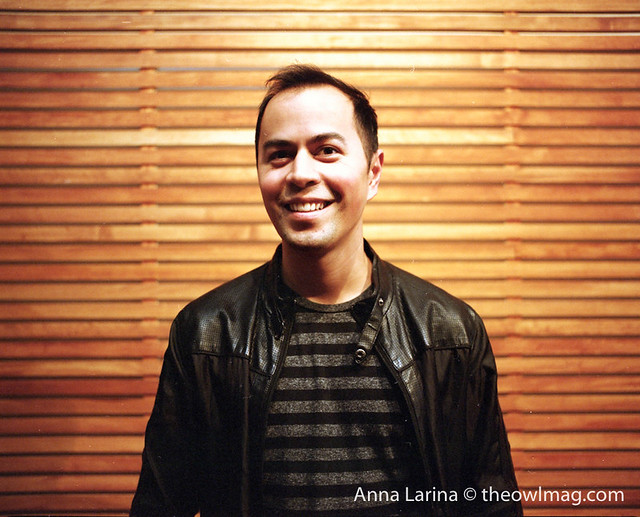 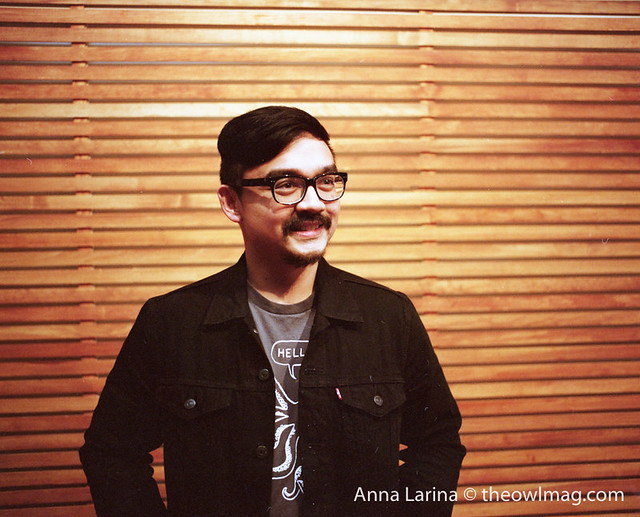 Check out Phosphene’s short demo for “Be Mine”