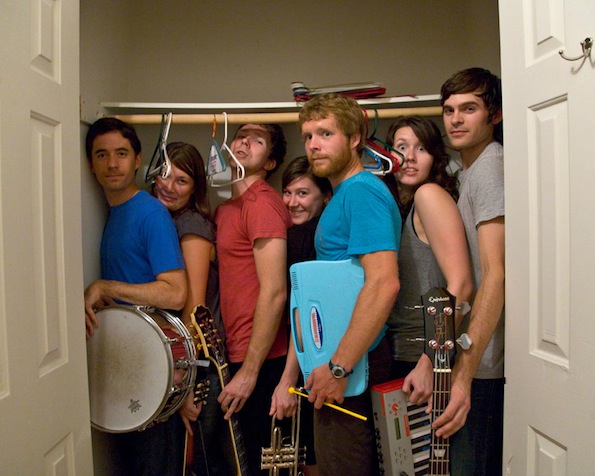 “Never mind that the buildings block the sunset because Team Genius is so perfect poppy sunny happy that they don’t need sunsets, all they need are dance parties,” pop rock band Team Genius posted on their Facebook.

The Brooklyn settled band Team Genius are looking to rid the gloom in the Five Boroughs, well four of them anyway, Staten Island is pretty set in their ways. Their signing to Paper Garden Records has led to their November released LP New York Songs.  A co-ed collective of good-natured out-of-towners that decided to pop a squat on the john of New York City. New York Songs showcases the tale of the band’s metamorphosis into being bona fide Brooklynites. It is safe to call the Genius crew a “team,” considering they have more people in the band than there are superheroes in The Avengers. Team Genius makes upbeat pop tracks, conducted by the energized and animated frontman Drew Hermiller.

Team Genius threw the NYC music scene for a loop around the proverbial roller coaster by releasing three EPs at once, all providing different vibes, Pop Songs, Loud Songs, and Whiskey Songs. Well there you have it, between New York Songs, and three EPs, the co-ed collective has provided enough options to satisfy the musical appetite of even the pickiest of eaters.