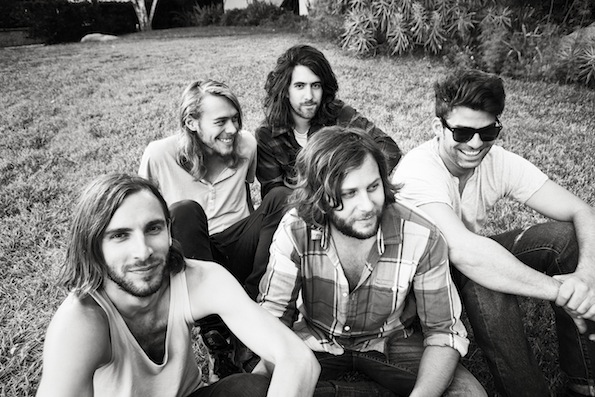 When I say that Silverlake’s Vanaprasta is a damn good band, I do so with a mouth that has eaten its own very judgmental and harsh past words. But you know what? I’m okay with that because nothing gives me greater pleasure than acknowledging quality music and giving these guys their props.

Whatever my reasons were for being dismissive of this band well over a year ago no longer exist. Perhaps their sound has evolved (in 2010 they had an entire album ready for their very hungry fans but wound up scrapping it entirely, then releasing Forming The Shapes EP), or maybe my ears simply weren’t ready to hear what they had to offer (that sometimes happens). Either way, I now hear Vanaprasta for the crushingly fine band that they are.

Earlier this year I reviewed their show at The Roxy with Saint Motel; that show evoked these words from me: “With a dedicated indie mantra, a side helping of raw psychedelic and blues topped with Steven Wilkins’ powerful vocals, LA’s Vanaprasta may have shown The Roxy audience what the future of rock could look and sound like when equipped with guitar precision, intelligent rhythmic shifts, youth, and pure fucking talent.”

That was May; here it is September and every subsequent performance has served to up my esteem. Their live shows are energetic, connective, and as expressive as the earthy tone and grit of Steven Wilkins’ voice, only one-upped when he lets his soulful psych-rock flag fly. He’s a screamer folks, and a damn good one but the beauty in his vocal prowess is that he knows when to dial up the raw power (“G-“, “Minnesota”) to scorching levels and when to lay it low (“Don’t Go Home”). Along with Taylor Brown (bass, guitar), Collin Desha (guitar, keys), Cameron Dmytryk (guitar, sleigh bells), and Ben Smiley (drums), Vanaprasta construct ambitious and dynamic sounds of Pink Floyd-ish experimentation to Zeppelin-ish guitar rock to full blown prog, but, hey, never let it be said that they aren’t afraid of tripping a little weird to the tune of ’50s bop in “Self Indulgent Feeling.” Odd duck in the scheme of things, that tune is, but it cops a good feel whether you want it to or not, and apparently Vanaprasta ain’t afraid to make you dance.

Their upcoming second album, Healthy Geometry, is done and tracks have been released (“G-,“ “Healthy Geometry,” “Supernumerary”) giving a taste of what’s to come. LA folks are waiting with ears wide open for its fall release and I’m sure that they will be pleased as will those who live outside of county lines. Strong elements of classic ’70s rock and blues seem to act as solid building blocks, but Vanaprasta dig deeper in order flesh out a sound all their own bound for mass appeal. What a difference a year makes.