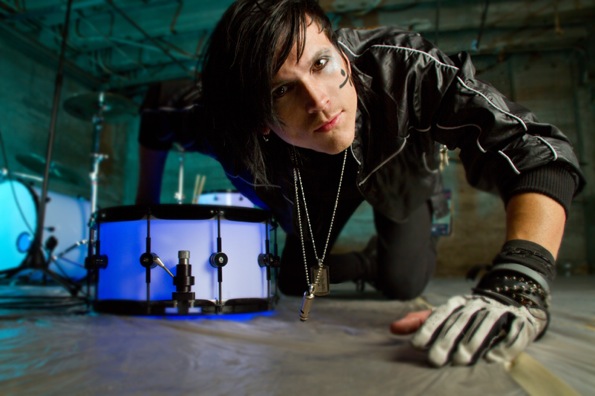 Youth, ambition, talent and technology. Individually each is an asset of worth, but the combination thereof is making way for an injection of new blood in the rock, electronic and dance scene at the ground level in Los Angeles.

If you called him a one-man band you would be correct, but a more fitting identifier may be “an experience.”

Band front men (and women) such as guitarists and singers tend to get all of the glory (groupies, stalkers, endorsements, keys to hotel rooms, etc.), but most of us know that a band is only as good as its drummer. They’re the beat keepers, the backbone, and without a quality one a band can end up a rhythm-less nation. Nobody needs that.

Eli James is part DJ, part singer, part lighting technician and ALL drummer who takes the act of beating on skins with wooden sticks and elevates it into elite performance art. Equipped with a specialized and downright sexy custom LED drum kit (aka the GLO Kit) which he controls to simultaneously glow to his precise mixes of some of today’s most rocking tracks and beats from Nine Inch Nails to Lady GaGa to Viva City, as well as his own original songs, all while drumming; what we have here is a music movement in three parts: rock show, dance party, explosion.

The Eli James Experience is here. Welcome to it.