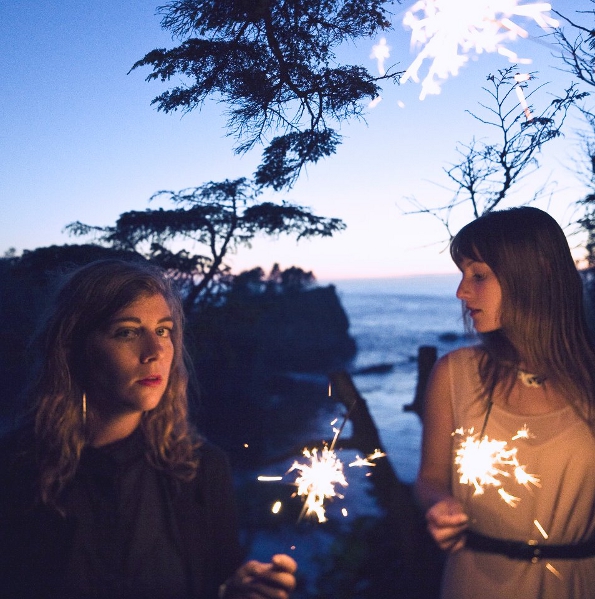 In the gender neutral bathroom of The Vera Project, a popular all-ages Seattle venue, two harmonizing voices could be heard. These two women wearing leggings and sweaters looked like they could be any one of the young hipsters waiting in the line wrapping around the corner outside. But they’re much more than just a pair of mid-twenties Seattleites, they are Lemolo: a ridiculously talented, up and coming dream pop duo.

Their simple yet electrifying sound blurs the line between the femininity of dream-pop and the strong aesthetic of rock, a vibe similar to Beach House. Lead singer Meagan Grandall boasts a clear and pure voice paired with guitar skills, while Kendra Cox drives it home with drums and keys.

Generally, they have been placed in the dream pop genre, but some of their songs aren’t so dreamy, Grandall said.

The two met as kayak instructors at a summer camp, where they bonded quickly. In high school, Cox had been a fan of Grandall’s music. “When we first got together it was a lot more folky and quiet, then we started experimenting,” Grandall said.

“We heard War Paint and St. Vincent and thought that girls playing electronic guitar is so badass,” Cox said.

Both said that they love what they do.

“I do it for the feeling I get when I write a song,” Grandall said. “It’s a feeling I don’t get doing anything else.”

“When we find that special spot it’s so rewarding,” Cox said.

Lemolo will be releasing their first full-length album, The Kaleidoscope, on July 3rd. “This record has been our baby and now we’re ready to show it off to you, and we couldn’t be happier,” the band said on their website. When speaking of what she hopes for in their future, Cox referenced Conan O’Brien: “Conan said, if you work really hard, and you’re kind, amazing things will happen,” she said. “I really believe that.”

Check out the video for “Whale Song” here: