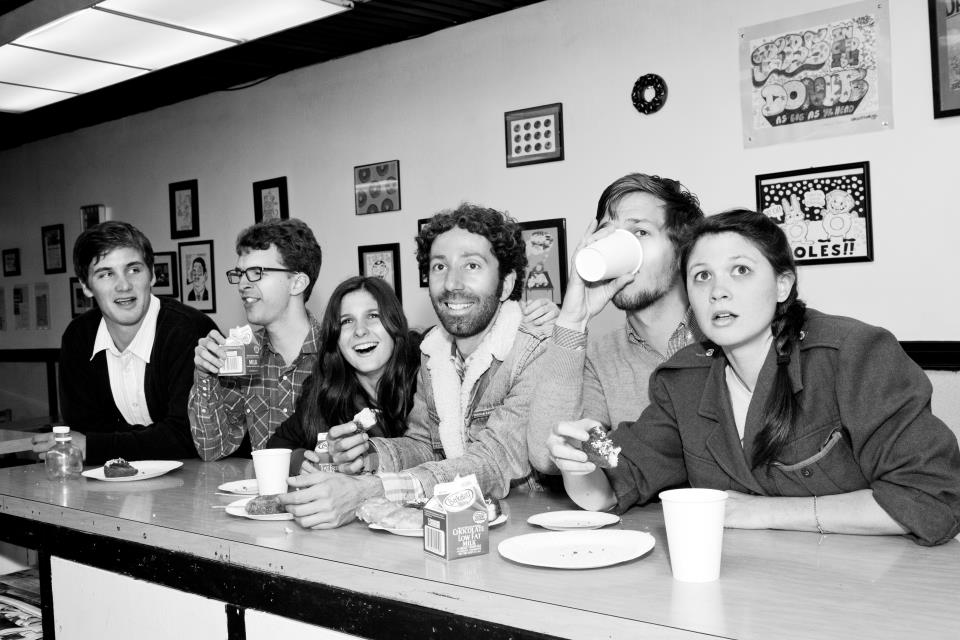 More than a year ago, The Owl Mag met up with Bevan Herbeckian and the rest of The 21st Century as they completed a successful fundraising campaign and prepared to hit the studio with a super-duper famous producer. It was… you know, all happening. So when we caught up with the indie sweethearts this month, we were surprised to see a new EP, some new faces, and even more new tunes set to debut at SXSW this week.

The Owl Mag: So when we last met, you were on the cusp of recording your debut album…which I understand didn’t go exactly according to plan. What happened?

The 21st Century: Yeah… so the original demos ended up catching the ear of a producer and after talking with him and meeting him—he’s actually based in LA, he flew up, and hung out with us—after a lot of talking we decided, you know what, we’re going to go and make our first record with him. We went into the studio, worked like mad for ten days, and walked away feeling absolutely invigorated and inspired. And sadly that’s when the story kind of takes a nosedive.

The 21st Century: (Laughs) Yeah, after we finished, mixing got delayed several times, months were passing, and then when the mixes actually occurred, they were just way off the mark from what we were hoping to accomplish. I'd say that we were trying to write pop hits –that’s true, but we were also trying to do it in a way that stayed true to where we started, which is a lo-fi core and having our personality in there and unfortunately the mixes seemed to wipe our personalities clear out of the recordings, and we ended up with this recording that didn’t sound like us. It just felt so far from what we wanted to do and so far from what we thought we were doing, which isn’t super uncommon in recording, but we had this very difficult choice to make.

The Owl Mag: …to nun-chuck that producer?

The 21st Century: Not quite. [Laughs] We made this hard to choice to part ways with our producer and take a stab at it ourselves. We didn’t know how we were going to do that. The whole thing took its toll on the band—a few members left, we had a debt, and we had a record that wasn’t mixed.

The Owl Mag: So your EP The City was finally released this year—are these those recordings?

The 21st Century: Yes—a dear friend of ours, Ben Tanner, who’s an engineer in Alabama [and keyboardist for Alabama Shakes], remixed it for us after three to f

our months of emailing each other, late night telephone calls, and just going over and over it. The mixes had up to 40-50 tracks, which is excessive even for a band of nine people, so it took a long time to get through it all—but we finished it, and we’re so happy that we did.

The Owl Mag: What’s your favorite track on this long-awaited album?

The Owl Mag: You also have a ton of new music, a lot of which you’re already playing live. Do you have another album in the works?

The 21st Century: Yes — so The City was about being young and moving to a city for the first time and the sort of courtships and hardships and all of those other-ships that come along with that sort of move. The next album is tentatively titled The Magic of True Love, which is a group of love songs that are also heartache songs that come from that other first in your life. And the album is also pretty autobiographical… So it comes from a relationship that came and then…went. What can I say.

The Owl Mag: Oh snap. Does that person know that you wrote…?

The 21st Century: (Sigh) Yeah, she knows. I mean, we’re friends. It’s fine. (Incredulous laughter all around.) It’s FINE. No I mean, when you revisit the songs, it doesn’t feel fine, but now it’s fine. Yeah…

The Owl Mag: Riiiiight. So you’ll be playing all of this “fine” music at SXSW this year! When and where?

The 21st Century: Right now we are playing at the Sweet Tea Pumpkin Pie showcase on Thursday, March 15th and planning on hustling to get a handful more in the next couple weeks and while we're there, which apparently is common practice. People should check out our website for updates.

The Owl Mag: Who are you excited to see at SXSW?

The 21st Century: Alabama Shakes—we saw them at The Independent a couple weeks ago and they were fantastic bringing together a raw, soulful, and energetic performance that reminded me of some old Otis Redding footage I grew up idolizing. Bare Wires is a great rock 'n roll band out of Oakland, and of course—and I do feel a little guilty saying this at a music festival for independent up-and-comers, but it's true—Bruce Springsteen. He's the boss, he's a musical inspiration, and kind of a life compass.

The Owl Mag: To conclude, I hear you also have some get-rich schemes you intend to pursue on the side of this whole music biz. Care to let us in on your secrets?

The 21st Century: We should make you sign a non-disclosure agreement.

The Owl Mag: It’s fine, we won’t tell anyone.

The 21st Century: Ok well, here’s two of many. One is a nightclub called “Barf.” Our slogan is, “I’m going to Barf tonight.” And then you know how there are some restaurants where if you eat, you know, the whole 72oz steak, you get it for free? You have to eat in under an hour or something. We’re gonna make this liquor cocktail that comes in a giant cup called “The King Ralph.” And if you can drink the whole thing, without puking, you get a t-shirt that says, “I Ralphed at Barf.”

The Owl Mag: That’s genius. What’s the second one?

The 21st Century: Oh yeah. Get a job at the bottom rung of a corporation, like in the mail room or something, and then through hard work and networking over several decades, make a six figure salary.

Show some Bay Area love to The 21st Century in Austin this week, and check out the video above for lil' piece of the action. See 'em locally a block away from their house (literally) at The Starry Plough on Friday, April 13th. They may even have you over for chicken.

UPDATE: 3/14/12 — Sadly, The 21st Century will not be playing SXSW due to a broken keyboard (and wallet). But be sure to root for the home team when they play in Berkeley next month, and get well soon, Keyboard!