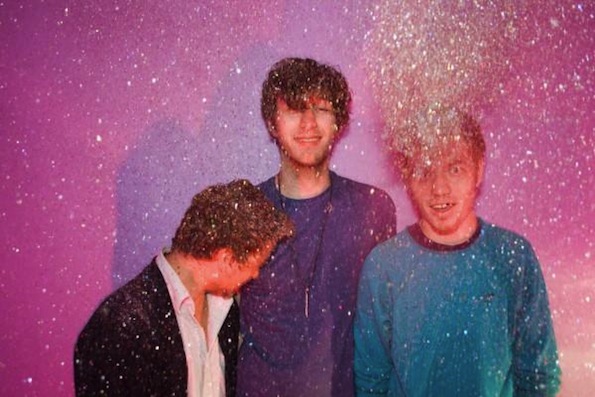 In addition to Frances Capell’s juicy new interview for you RG fans, The Owl Mag is proud to feature Religious Girls in the first video featurette of the NorCal Report, wherein Sara Appelbaum and Wolfgangg uncover and document local Bay Area musical stylings of up-and-coming talent for you, the discerning music lover.

Religious Girls were born to shred. Nick shreds drums, Chris shreds keys, and Guy shreds both. Their blend of shimmering synth tones and lots of percussion blew my mind a few weeks ago at Bottom of the Hill, and I recently caught up with them in Oakland to talk about a brand new 12-inch, their upcoming U.S. tour, and finding their spirit animal.

The Owl Mag: How would you describe Religious Girls for someone who’s never seen or heard you?

Guy: That’s really hard. What did I go with the other day? Spider-jazz clusterfuck?

The Owl Mag: I’ve heard that you guys come from some pretty eclectic musical backgrounds. What were you doing before Religious Girls? 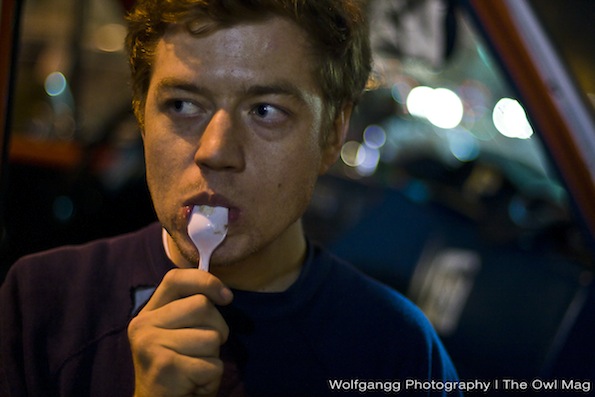 The Owl Mag: How did you get involved with Religious Girls?

Guy: And I played shows with him in that old band I was in.

Chris: So we were all in different bands. Three amazing bands, but lesser of what we are now. Slowly, we took one another in.

Guy: It was very corporate business. People got kicked out and Myspace bulletins were posted and I, like, skanked in on that. And then when I joined, we changed the name to Religious Girls, went on tour, kicked out our drummer cause he wasn’t Nick, then forced Nick to move to the Bay and join the band. 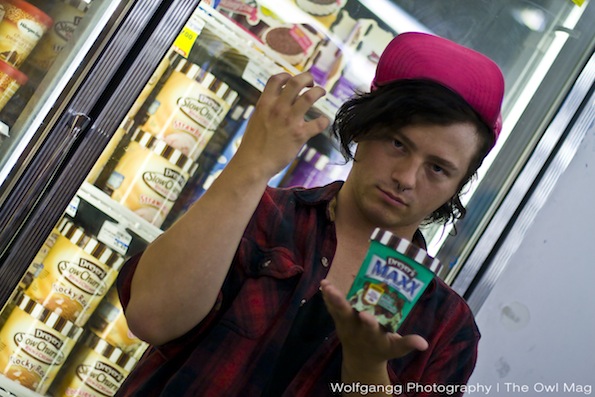 The Owl Mag: Can you tell me a little bit about your songwriting process? How does your material come together?

Chris: Hours and hours in a room together, sad.

Guy: A lot of forced bonding. We write songs on keyboards first, or noise, like our samples, first.

The Owl Mag: What do you like to do when you’re not playing?

Chris: Hang out on the web with my friends. Playing video games (laughs). We hang out. We party around here a lot.

Guy: I like to make friends, for sure. I’m all about friend opportunities.

Guy: This motherfucker will kill a dance off, every time.

The Owl Mag: Do you guys have day jobs?

Nick: I don’t have a job. For two years running.

Chris: I work with kiddies. I work at an after school daycare program. 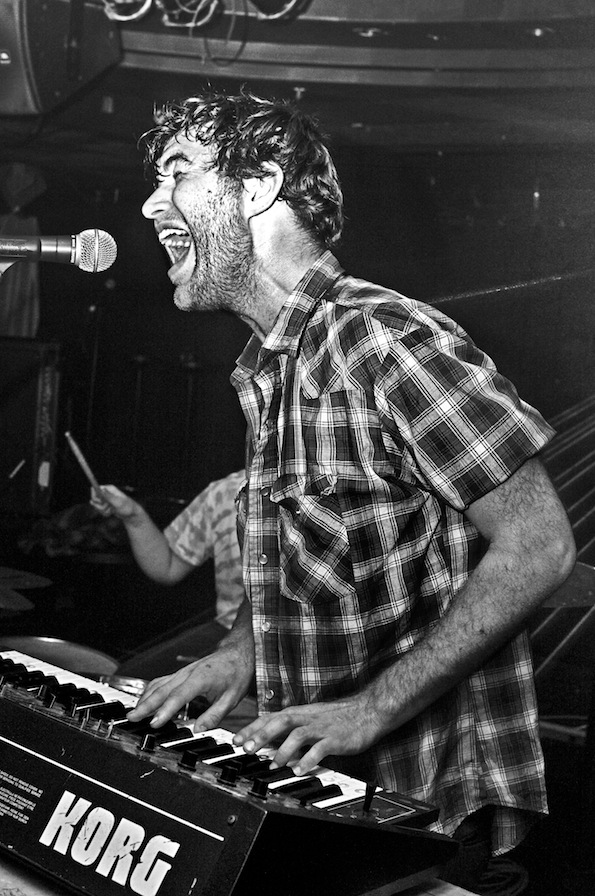 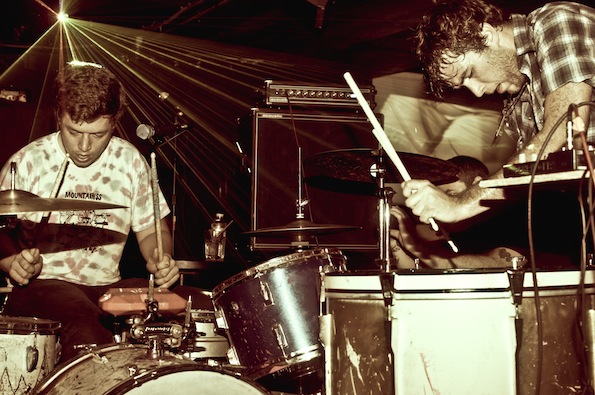 The Owl Mag: You have a new album coming out, yeah? Does it have a name?

The Owl Mag: How would you say it’s different from other stuff you’ve put out?

Chris: It’s also our first time doing it in a nice studio.

Guy: The drums are way louder this time around, thank God. This one knocks.

The Owl Mag: There seems to be a spiritual vibe going on when you guys play. Would you say that’s accurate?

The Owl Mag: Is that something that’s always happened, or is it unique to this band?

Chris: We were all kind of like that, I think. We’re all intense musicians, but when we came together it exponentially increased the intensity (laughs).

Nick: I think this is the most challenging project any of us has ever been involved with.

Guy: We definitely are all doing more musically and physically. Just exerting ourselves more than anything we’ve ever done. It takes a lot out of us. I’m normally sweating by five seconds into the set.

The Owl Mag: You’re about to go on your annual summer tour. Did you decide on a name for it?

The Owl Mag: Wanna share any crazy stories from past tours? 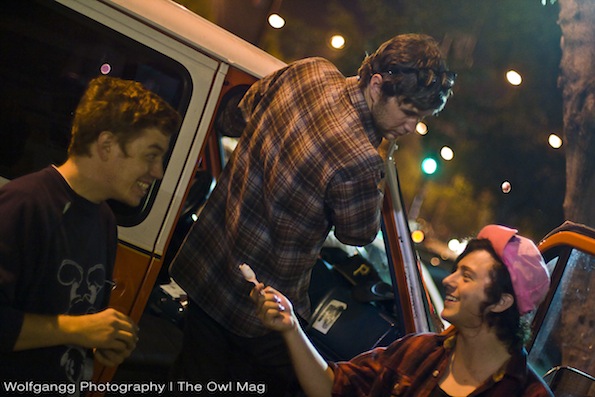 The Owl Mag: And you guys played a show there?

Chris: (Laughs) No, no. We just like to talk about it.

Guy: The place was segregated until maybe two years ago now. It was just covered in Juggalos and gnarly dudes.

Chris: Which is our prime market.

Guy: It’s this huge tower made of scrap wood, and just whatever, that this old man built. And then when he died it was desegregated. Huge confederate flag flying over the top of it, and just Juggalos, diving into this gnarly water that had like, what was in the water?

Guy: Water Moccasins. There were snakes and stuff in the water.

Nick: My whole goal for that tour was to find things I could jump off of into water. I got four or five.

Chris: More than four stories high was the rule.

The Owl Mag: What do you hope people coming to your shows will take from the experience?

Guy: Some sweat, some day-glo paint, and, uh, hopefully some merch.

Chris: Obviously it’s for them to have a good time; enjoy it. Feel what we’re trying to convey through playing. We’re putting a lot of energy into every time we play, and I think people normally get that cause they’re dancing around. And normally people, like, first time, will start chanting along with stuff they don’t know. But that’s the best part. That’s probably the best feeling, too.

Guy: Yeah. Our old set had a huge group chant at the very end. I got to pull my drums out and cover them with paint and get up in everybody.

The Owl Mag: What’s the first thing you do when you get back from tour?

Nick: Usually something tragic happens back home when we’re gone and we have to come back and fix the tragedy.

Guy: Our first tour, the house we lived in got totally demolished by this guy I had to sublet my room to. He turned out to be a tweaker that liked to just nail things. He used to put nails in things and be like, “Art.” 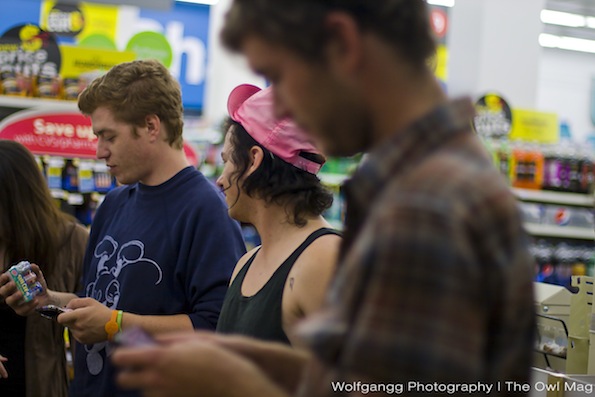 The Owl Mag: If Religious Girls was an animal, what kind of animal would you be?

Chris: What about a beautiful black stallion? Like, running free in the grass.

Chris: Ooh. That is pretty good.

The Owl Mag: Any words of encouragement to get our readers out to see you on tour?

Guy: Free kittens for the first 50 people there at every show. Every show.

Religious Girls are about to shred ’til they dead all over the country. They’re bringing 100 hand-screened copies of Midnight Realms along with them; the rest will be available online in September.