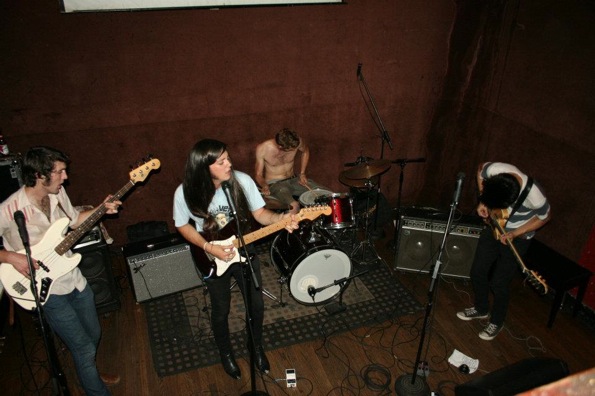 Lots of local bands rock the stages of San Francisco, so when one of them stands out, it’s not luck. San Francisco rock band Cool Ghouls definitely caught my ears on February 14 when they kicked off Noise Pop at Bottom of the Hill — and for good reason. Self-described as California sunshine rock ‘n roll, the band turns out a sound of bouncy, surf-inspired guitar riffs paired with playful and sometimes rock-driven vocals. When you hear the result, you’ll likely agree they’re aptly labeled.

The band is comprised of Ryan Wong (guitarist), Pat Thomas (bassist), Alex Fleshman (drummer), and Pat McDonald (singer who also plays guitar). Two of the members attend San Francisco State University and all are living the “struggling young musician” life. The group will play at Brick and Mortar Music Hall on March 14th alongside buddies Poor Sons and The Tambo Rays. They’re currently shopping for a label and are busy adding the finishing touches to their album. The band plans to release the album, their first full-length offering, in the next month or two. Check out the track below to see what all the noise is about. You’ll probably end up making it to their next show.