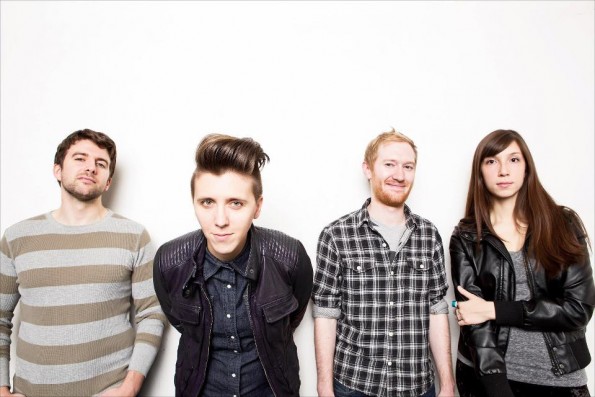 You know the old saying: it don’t mean a thing if it ain’t got that glockenspiel. Or something. Championing bright and upbeat synth pop with a splattering of glockenspiel and guitar fuzz, the Brooklyn four piece, Le Boum, still manages to handily avoid safe indie music territory. They claim to evoke “the fun of summer and the excitement of finding out your crush likes you too,” an apt description for the joyful and sometimes surprising sounds of their debut EP Say Hello.

“Paper Planes” is the most absolutely ecstatic song on the EP, turning on a dime from buzzing 1980s synth lines to a rip-roaring power pop guitar solo— an occasional gift here that elevates tunes to the next level of energy and songcraft. “Directions” then feels like a cool summer wind, an easy breezy guitar line that winds and rings alongside harmonizing vocals. Drums aren’t ignored either, and their striking presence is one of the elements preventing these songs from sinking into shy cuteness. Even in the children’s-rhyme-like “Sons & Daughters,” that glockenspiel teams up with a surprising guitar solo to create slight discord. Le Boum sets up for harmonious pop, but in the mess of noise and layered vocals and heavy rhythm, shows off its willingness to mess with convention.