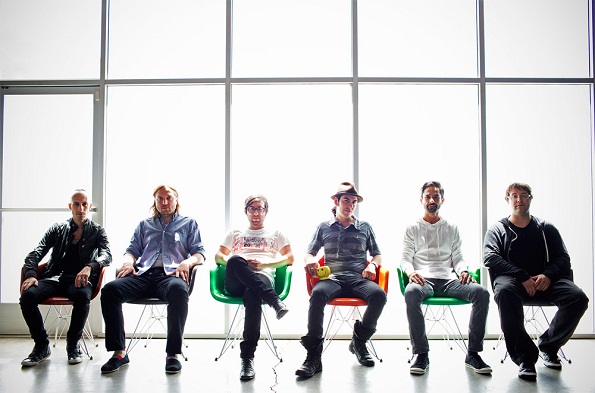 “See the thing about the number two, it’s mysterious…” sings Dhani Harrison in “The Number” on the latest album from thenewno2, thefearofmissingout, and that’s really this band in a nutshell. Their name is in homage to a character from the TV series The Prisoner, which just furthers the attempt at mystery… and a bit of anonymity. Their music is alternative rock with a good helping of electronica, and a listen soon reveals that Harrison is the son of George Harrison of The Beatles – the only similarity is in his voice, and it works well. The six members of the band – Harrison (vocals/guitar), Paul Hicks (keyboards/programming), Jonathan Sadoff (keyboards/guitar), Jeremy Faccone (guitar), Nick Fyffe (bass), and Frank Zummo (drums) – have been busy recently releasing their second album, appearing on the Conan O’Brien show, performing at Lollapalooza, and soon heading out to open for Jane’s Addiction on their fall tour. We recommend catching one of their live shows so you can hear their futuristic sounds for yourself.