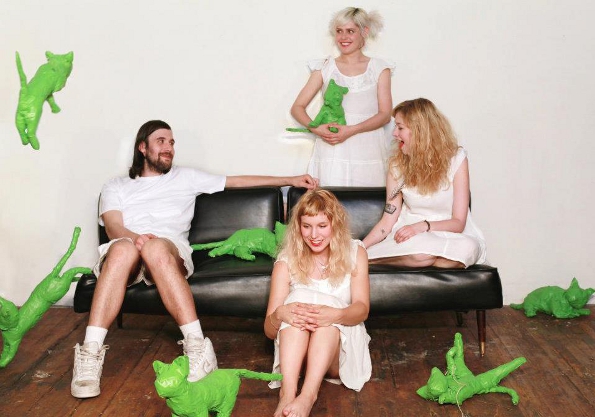 Everyone loves a good palindrome; those playful words or phrases that read the same backwards and forwards. Seattle-based Tacocat‘s got a fitting moniker for that very reason. Reminiscent of Girls and Tennis, the punky foursome play short songs with soaring guitars and beach-ready vocals. “Spring Breakup” is lo-fi gold and uses every breakup cliché in the book, while “Psychic Death Cat” gives the bubbly Shonen Knife a run for their money.

Tacocat just finished up a strong March, hitting SXSW and garnering attention from the likes of VICE, who did a hilarious microinterview with the band. Since then, they’ve toured seemingly everywhere between Austin and Seattle. Catch them April 13th at Yellingham Festival in Bellingham, WA and check out their recently released 7″, Take Me To Your Dealer EP. In the meantime aurally chew on their quirky “Volcano”: