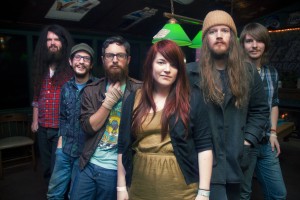 In 1948, Hank Williams Sr. was asked how he decided to start making country music. He responded by saying, “I don’t know what you mean by country music. I just make music the way I know how.” What he created is what felt right and what came natural to him. 63 years later, his attitude towards music reflects that of certain musicians today. Banditos, a six piece band from Birmingham, Alabama, is a perfect example of this; following in Hank Sr.’s footsteps with their “I do what I want” honky tonk attitude, Banditos create raw and gritty southern music that will get anyone and everyone stompin’ their feet.

Coming together as a full band in September of last year, they recently released their first EP, The Filthy Sessions, along with a music video for their single, “Filthy, Havin’ Fun.” Currently, they are working on their full length album which will be released in late May of this year. Though still an incredibly new band, Banditos have been gaining popularity and recognition very quickly, booking shows all around the south and a rapidly growing Facebook fan page.

Timothy Steven Corey Parsons and Stephen Alan Pierce II first formed Banditos over nights of drinking beer and messing around on their guitars and banjos. Even in a bit of a drunken state, they were putting together songs they saw a lot of potential in, and eventually had a few friends including Randy Taylor Wade, Mary Beth Richardson, Jeffery David Salter, and Jeffery Daniel Vines making music with them in no time. Their first show in Birmingham turned out to be a big success and quickly started the rise of Bandito fans, known collectively as Fanditos. On May 26th, they will be playing their biggest show yet with The Zac Brown Band at the Verizon Wireless Amphitheater directly outside of their hometown. Not even a full year as a band, and they’re already booking amphitheater shows…that’s gotta be saying something.

Banditos are reminiscent of Creedence Clearwater Revival and Johnny Cash if they got into a brawl with the Rolling Stones and Janis Joplin. Mary Beth Richardson, the only lady gracing Banditos on stage, can easily be seen as their secret weapon. As a whole, however, Banditos is a honky tonk, two steppin’ forcefield that the music industry needs. Staying away from anything electro, indie, or computerized, Banditos goes back to the roots of rock ‘n roll with their roughneck attitudes and raunchy instruments.