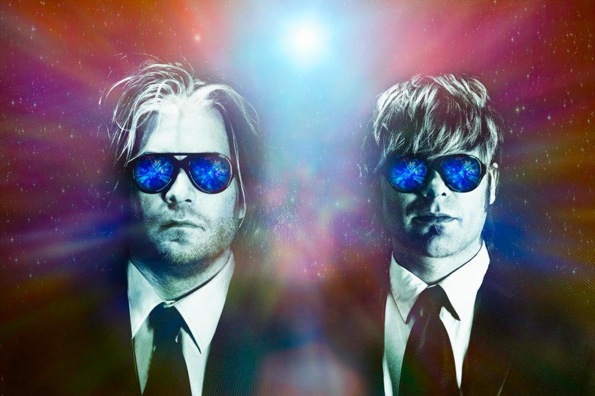 I started to jot a small list of bands that Ashtar Command reminded me of so that I would be able to say for fans of fill-in-the-blank-awesome-bands, you will love this. However, the amazing, brilliant thing about the debut album from this band is that list can easily be 20 names long. What else can you expect from two guys-Chris Holmes and Brian Liesegang- that have a music pedigree that includes Smashing Pumpkins, Nine Inch Nails, and Filter between them? The music ranges from sweet, happy pop tunes, bittersweet love lost songs to an addictive guitar opened rock song-all the better to match the guest line up. Priscilla Ahn is heard on two tracks (“Rosa,” “The Breakup Song”), Rachel Yamagata (“Blister of the Spotlight”), Joshua Radin (“Mark IV”), Z Berg (“Gravity”), Alex Ebert (“Save Me”), and last, but most definitively not least, Har Mar Superstar (“That’s How It Is”). How awesome is your band that this many artists said sign me up, let’s make music together? Pretty damn awesome, my friend. Ashtar Command proves that eclectic and diverse are not code words that really mean wow-a-producer-would-have-been-nice. The sound is inclusive and cohesive by design; this is music by guys who know what they like and what they like is to never be limited by a single genre. In an interview with our very own Hillary Smith, Holmes stated they want “…to bring joy to the people and help them feel a part of their soul.” Liesegang added “The only pertinent, vital, and essential job as an artist is to communicate.” Well, then on their inaugural mission, Ashtar Command has achieved success.

Save Me – Ashtar Command (featuring Alex Ebert) by grammy mammy