DITTIES FROM DOWN UNDER: Oh Mercy 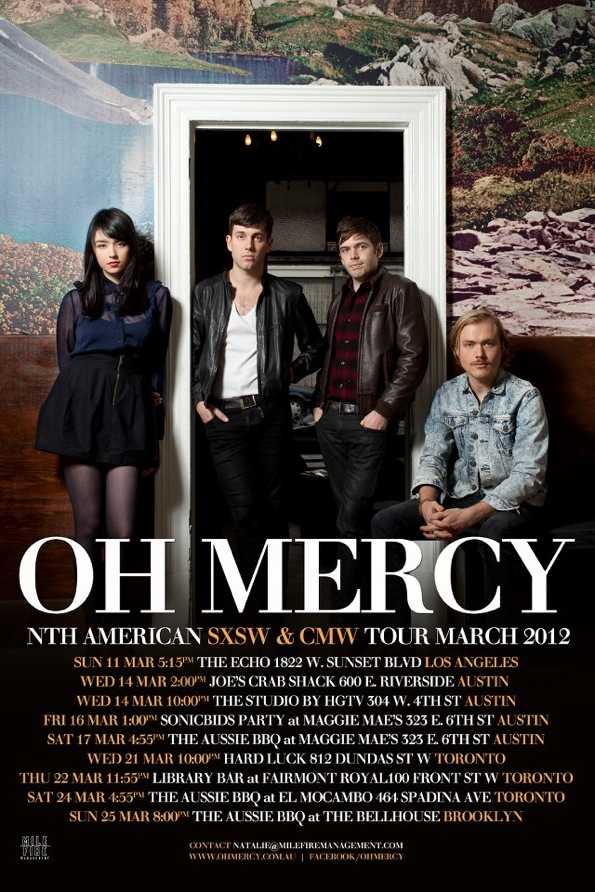 For happifying indie-pop, get out to see Aussie band Oh Mercy on their North American tour this March. The quartet, who hail from Melbourne, are playing headline shows in LA, Austin, and NYC as well as appearing on the SXSW lineup.

For a taste of their guitar-driven pop, “She In Between” is a twangy country-tinged guitar and a stripped back acoustic sound, this song showcases their simple, but effective melodic pop. It is available as a free download if you follow the link below.

Their second and most recent album Great Barrier Grief was produced by Mitchell Froom, who produced fellow Australians, Crowded House‘s debut. Indeed, there is something similar in Oh Mercy‘s warm, melodic approach to songwriting that could be compared to Crowded House‘s “World Where You Live.”

Great Barrier Grief offers dreamy, soothing tunes penned by lead singer Alexander Gow, with emotive tales of love and relationships. “Confessions” is upbeat, rhythmic pop with a 1960s vibe. “Let Me Go” is slower in tempo, and broods with tinkering keyboards and downbeat vocals by Gow.