ANATOMY OF AN EP: Tender by Wax Fingers 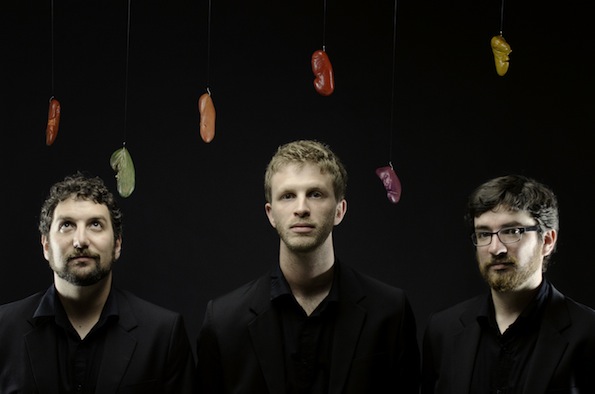 Portland, Oregon’s Wax Fingers is a three-man band of wizardry who mine the oeuvre of math, noise, prog, and indie rock with a particular finesse and agility that kind of keeps it from going off the rails and into an unfortunate, if not self-indulgent, stratosphere. “Off-kilter-pop-rocks” is how Pete Bosack(vocals/guitar), Zac Jacobson (guitar), and Tommy Franzen (percussion) tag what their collective brains give birth to and they surely employ an angular sound with their latest creations making up a new four-song EP called Tender, which was released on July 24th.

What we have with Tender is something of a “flipside of the same coin” scenario: where their 2010 self-titled full length debut release showed them leaning into their bolder formations, this EP comes at us differently. In the listening you’ll hear what could be called aggressive restraint as the band, somewhat tactically, orchestrates a progressive sonic build from the first track to the last. From the rich jitter of “Bauhaus” to the expansive and heady rush of “Almost Always Sailing,” we wanted to know more about the who, what, when, and how of the songs and how this EP came to be.

Since there’s no better method for info gathering, we went straight to the waxy fingered source: Zac and Pete. What comes as no surprise are the complexities involved in making their particular brand of noise, so have a listen to the EP and see what they had to say about Tender, track by track:

“Bauhaus”
Zac – Our writing process is generally very gradual, mainly because it’s highly collaborative, and we put each section of a song under a microscope. “Bauhaus” however came together incredibly easy. I was tooling around with a delayed kick drum sound on the sample pad I play, and came up with a nifty little beat.Pete came up with the guitar and synth melody…once we introduced the song to Tommy, he was able to nail down that sparse but dynamic drum part almost instantaneously. It’s by far our most minimal song, probably because Pete layers his guitar part gradually over that menacing bass loop, which runs throughout the entire thing. The whole song reminds me of a darker more menacing version of an xx song…minus the sultry female vocals.

“Tender”
Pete – This one is another departure for us. Most of the songs from the full length have a certain frenetic quality to them and “Tender” is much more subdued. I wrote “Tender” on acoustic guitar, it came together pretty quickly, but it took a while to get all the guitar effects and instrumentation dialed in. Zac and Tommy are both pretty critical. I often obsess over a song for a while before I even let them hear it because I can already tell what parts they’re going to have a problem with. Zac has a way of exposing all of a song’s weaknesses. It can be aggravating to present some song that I put a bunch of time into only to have them poke and prod at all the issues it may have, but it’s for the best, and their criticism is usually accurate. I’ve learned to just take the feedback and get to work. The songs are always better off for it.

“I’m So Limber”
Zac – I suppose at least one broad theme for this EP is a sort of menace that lurks just below the surface of the songs…at least the first 3. That’s one of the things that initially drew me to to ISL, which in its second half, flips itself over to reveal a sunny bouncy side..that’s still a bit off-kilter.

Pete – This one took a long time to write. It all started with Zac playing a few chords on his Omnichord. Those chorus swells in the first half are built around Zac’s original chord progression, but we ended up dropping the Omnichord altogether. After we got that first half nailed down, there were many different attempts at ending the song. I think it has some of the most dynamic vocals on the EP and that’s probably a result of me playing it a lot by myself. Eventually that end riff came to me and we got to work arranging the second half. That ended up taking another month or so. The crazy drum beat, those big power chord hits, the finger tapping conclusion….we had all the parts but it can take hours of playing it to get them to all sit nicely with each other. We don’t tend to tolerate imperfections in a song, we just keep playing it over and over until it feels right. I’m glad we stuck it out with “I’m So Limber,” I think it’s my favorite track on the EP. Tommy’s drumming on that second half is really what does it for me. I’ll take this opportunity to acknowledge the fact that most of our songs would not be half as good without the contribution Tommy makes on the drums.

“Almost Always Sailing”
Pete – I got my hands on an Eventide Pitchfactor (guitar pedal) and it has really opened up some new sonic possibilities. AAS came together while I was learning about what this new pedal could do. I started layering guitar loops and came up with the rough skeleton of the song pretty quickly. I love how bizarre the end is. We really felt like the end should be a cacophony of weirdness. The song didn’t have vocals before we recorded it, I think they really helped to pull the whole thing together. I just went for it, moaning and cooing into the mic, it’s gonna be tough to pull off live. I’m really happy with how the EP concludes. I wanted to create the feeling of a full length, to have the diversity and trajectory of a well-crafted album, but in the compact form of an EP. I think we managed to pull that off to some extent.