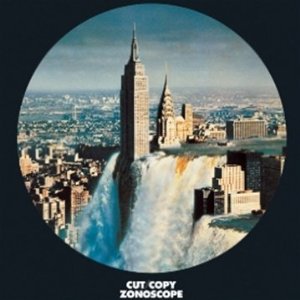 Everybody gets dry spells and in monotonous ruts once in awhile. My personal favorite way to kick that dry spell is to return to something familiar yet slightly new. After months of less than sub par rendezvous with some of the snooziest of San Francisco’s twenty-somethings, I was ready to, well, take things into my own hands and give up on humanity. Then one of my second tier guy friends decided to slightly revamp his personal style after coming back home from a short-lived “big move to the big apple,” and let’s just say my interest was piqued.

Cut Copy‘s latest, Zonoscope, is just like Mr. I Wear Leather Jackets Now. They’ve been gone for awhile, came back slightly revamped and you fell back in love (or lust in my case) with the familiarity still in tact.

The band seems to be taking note from fellow Australian group Men at Work by infusing the synth heavy tracks with tropical, exotic features. Frontman Dan Whitford states they “used all sorts of strange bongos, rototoms, congas, 10 kinds of shaker, 15 different cowbells anything and everything. Even wine bottles filled with different amounts of water.” While Zonoscope carries the tropic undertones through most the album, the band has also added 60s inspired harmonizing most noted in “Where I’m Going” and some dark Joy Division-esque tracks such as “Corner of the Sky.” There are, of course, the usual infectious dance anthems that we’ve all grown to love wedged between the hypnotic lush tracks, such as “Take Me Over” which will be the much needed replacement of “Lights and Music” in every indie dance party’s playlist.

Just like the newly matured friend who’s number was inserted into my list of frequent late night calling, Cut Copy’s recharged energy re-piques your initial interest of familiarity and keeps the album in your stereo for the long run.