“You’re Going to Make It” by Mates of State 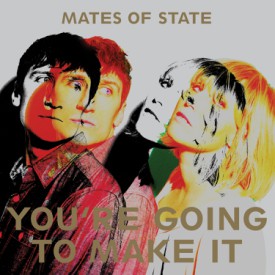 Mates of State
You’re Going to Make It
[Barsuk Records]

There’s little to criticize with Mates of State. They’ve been making successful indie pop electronica long enough to know their genre and their audience. Releasing an EP because nobody listens to full length albums feels out of touch after the back to front enjoyability of their previous release Mountaintops. Singer/drummer Jason Hammel thinks we only want the hits, so that’s what we’re getting in You’re Going to Make It, five instant hits.

Lead single “Staring Contest” is full of the promise of eager lovers and early Mates of State glory. The track begins with signature kick drum and keyboard chimes, then begins in earnest with the seal of approval from frontwoman Kori Gardner: “Hey I like it like this.” The song erupts less with new love than that sticky, gross, and enduring passion of being happily married. Emotional outbursts like “it’s all about you/I’m wild about you” are what inspire interview headlines where Mates of State remind you that they love each other more than you’ll ever love anything. Kori’s sharp vocals, which build into their own eruption, are offset with the calmer Jason proclaiming “I once was wild.”

“I Want to Run” continues the high-energy emotion. In addition to harmonizing with one another, Mates of State successfully layer Kori’s voice over her own. Again we have the reminder that it’s better to be creative together rather than apart. Where the song could be too sweet (“you’re all that I’ve got when it’s dark”), Mates of State save it by integrating all the elements in a nuanced manner. There are hints of 80s New Wave, the reliance on electronic components that really throttle the song until it gives the listener everything. “Gonna Get It” starts out slow and then ends strong enough to work by itself. With You’re Going to Make It, Mates of States make good on their promise to release only the hits.