“Year of the Flesh” by Dad Rocks! 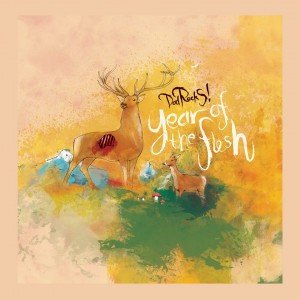 Year of the Flesh, Snævar Njáll Albertsson‘s second full length album as Dad Rocks! (don’t forget the exclamation mark), tones down a lot of what made his first so distinctive. Perhaps springtime has something to do with it. Mount Modern was undeniably wintry, arpeggiated strumming setting each scene with a touch of sorrow. Year of the Flesh bursts at the seams with ornate arrangements heralding the season of rebirth. Sometimes it bludgeons, like the fanfare on “Daughter,” and other times it blooms, like the flaut-rock finale of “Waves.” The orchestral intimacy of piano, strings, and choir gives “Managed” power. “Cyberbullies” has to be the prettiest song to feature the line “she felt a fist pound her in the face.”

The Denmark by way of Iceland bard still peppers his lyrics with contemporary references. Hearing about smartphones and Soundcloud in folk music is refreshing, though the snark can grow a bit gimmicky. Albertsson’s bass vocals are mixed lower than his baritone, presumably to remind listeners more of XTC and less of Crash Test Dummies. Dad Rocks! downplays disillusioned vulgarity in favor of upbeat chamber pop, and Year of the Flesh‘s overindulgent results turn the artist’s exclamation into a question.