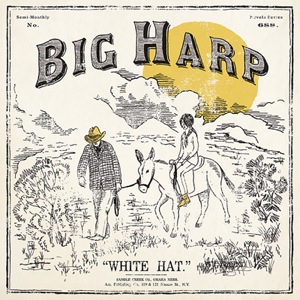 Attention lovers of bluesy, alt-country, rock mish-mosh bands… this one’s for you! Filled with no-frills twang, sultry rhythms, and classic American melodies, White Hat is worth a download.

White Hat is the debut album of Big Harp, and is the love-child of Chris Senseney (lead vocals, guitar, keyboards) and Stefanie Drootin-Senseney (bass, background vocals), but it’s not their first. The duo is a married couple with children and two separate musical careers, now merging into an identity of its own.

It’s been a big year for the Senseneys. Big Harp was recently signed to Saddle Creek, White Hat was produced and is being released this week, and Stefanie’s other project (as if the mother, wife, and successful bassist gigs weren’t enough), Omaha Girls Rock (OGR), held its first girl’s rock camp for a week in July. Stefanie is the founder and executive director of OGR, a program with a mission to “give girls the confidence to use their own voice through music education and performance.”

“Steady Hand Behind the Wheel” is a great example of how Chris’ monotone vocals are well-suited to the stripped-down, playful music. White Hat is released this Tuesday, September 13 with a tour to follow.

Big Harp: Everybody Pays from Love Drunk on Vimeo.