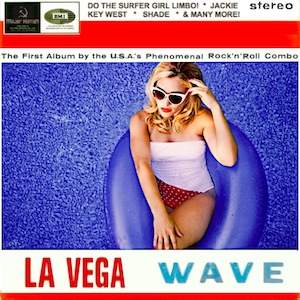 This album is guaranteed to have anyone up and dancing madly round in a matter of minutes – we speak from experience! Austin-based two-man band La Vega’s debut album is the ultimate beach-party anthem. The 13-track LP Wave is the band’s surf-pop-rock-meets-garage celebration of sunny beaches and summer nights.

Opening track “Do The Surfer Girl Limbo!” pretty much sums up that sentiment in upbeat yet bluesy guitar riffs. Standout track (and the band’s first single) “Key West” shows off their guitar-pop skills with its undeniable catchiness and a healthy dose of reverb. Meanwhile the rest of the album is rejoicing in a ’60s party of psychedelic rock ‘n roll with hints of grittier Vaccines-like influence. The album draws to a suitably nostalgic close with the melancholy reminiscence and faded vocals of “It’s Nice To Think That It Might Be True.”

This is an album that would be best enjoyed played through loud speakers, gathered with a group of friends on a sun drenched beach in California with an ice cold beer in hand. Just a suggestion.