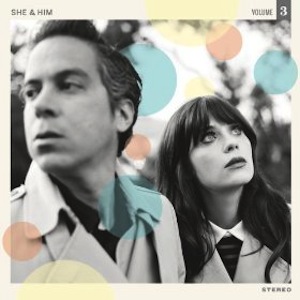 She & Him
Volume 3
[Merge Records]

The formidable musical duo of She & Him was once seen as a side project for indie darlings Zooey Deschanel and M. Ward – one a talented actress/singer, the other an accomplished guitarist. Three albums later, She & Him have shown their commitment to making the best sunshiney pop albums around. Special guests on Volume 3 (Mike Watt, Tilly and The Wall, and members of Rilo Kiley and Devotchka) round out the rich sound.

The ’60s pop theme still runs strongly through the veins of Volume 3, with oohs and ahhs in “Something’s Haunting You” and “I’ve Got Your Number, Son.” There are also fun flourishes of horns and sentimental strings that perfectly complement “Together” and the reprise of “Shadow of Love.” The She & Him touches on cover tracks “Sunday Girl,” “Hold Me, Thrill Me, Kiss Me” and “Baby” suit the classic songs rather than wash them out. Deschanel’s confidence in her songwriting shines through and as producer, Ward knows how to coax out the best of her smooth-as-cream alto. “She” is well on her way to becoming Dionne Warwick and Burt Bacharach all rolled into one.