ALBUM REVIEW: “Under The Pale Moon” by Wymond Miles 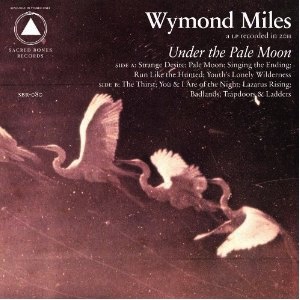 You might know him as the slightly enigmatic lead guitarist of San Francisco’s ace garage rockers The Fresh & Onlys, but Wymond Miles is a gifted songwriter all on his own. Released earlier this year, his EP Earth Has Doors was a tantalizing first glimpse into a world of music remarkably different from that of the Onlys. Under The Pale Moon is the full realization of that universe, beautiful and grand.

The first thing you’ll likely notice is Miles’ voice; his expressive crooning is spectacularly operatic and grimly emotional, sounding like a younger (and American) cross between Robert Smith and Nick Cave. Unless, that is, it’s “Singing the Ending,” in which he sounds like Bono in his early days. The song also supremely illustrates what the album strives to be musically: an exploration of the atmosphere, of the dreamy and romantic, mid-to-late 1980s guitar pop, complete with the haze, the twang, and a good deal
of heartache poetry.

However, part of the reason why Under The Pale Moon is a wonderful listen is because it never sounds ’80s, regardless of how much jangle the guitars make or how funky and post-punk the bass lines get. Miles hints at a number of the decade’s clichés, yet never settles on one for too long, adding a great deal of contemporariness to the mixture as well. While his admitted inspirations with, say, Nikki Sudden, are easy to spot, ultimately Under The Pale Moon is much more Wymond than Nikki could ever be.