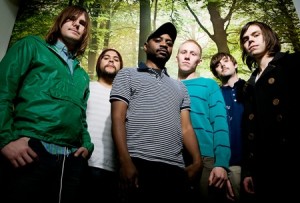 I mean, should I be nice here because Crystal Antlers is putting their art out there and clearly they have a following if they played at SXSW? Or should I listen to the evil, shit-talking little devil on my shoulder? Let’s try both.

Supportive Sara: When it’s good, Two-Way Mirror is solidly ‘B-range’ good. The title track “Two-Way Mirror” is an interesting mix of surfer rock and grunge, and the incessant reverb that nearly ruins the album actually fits here. “Way Out” is another glimmer of hope with haunting, melodic psychedelic-ish jazz organ. (Of course it’s pretty much an interlude at a mere 1 minute 42 seconds.) Jack Endino (previous collaborations with Nirvana and Mudhoney, the record label points out) mixed the tracks. This is a pro and a con for reasons explained below in the bitch portion of this review.

Shit Talking Sara: I find it interesting the record label chose to list Nirvana and Mudhoney alongside Crystal Antlers in any capacity for two bitchy reasons: 1. It’s not 1993. It’s 2011. I get as nostalgic as the next 1982 baby for the good old days when rock was grunge, music was actually created by real instruments and played by real musicians, and screeching was a valid form of expression. That said, you simply cannot make a sound which fits perfectly in the middle of a done-to-death genre of music and expect praise. 2. Crystal Antlers, to me, lacks the focus that is evident in Nirvana’s piercing genius and Mudhoney’s signature balance between 70’s punk and 60’s counterculture. Is Two-Way Mirror an homage to grunge? To screeching/melancholy vocals? To guitar riffs? To jazz-like progressions? To syrupy slow drums? To reverb? Well, clearly to reverb… And oh my STARS, was I bored listening to this. When Two-Way Mirror drags, it drags hard. This is especially true for the track “Fortune Telling”. I found myself gritting my teeth and trying to force back the familiar feeling of being held hostage in some asshat’s basement pretending to be riveted by my friend Daniel’s middle school garage band (sorry, Daniel). Again, the 90’s are no more- act accordingly.

Devil wins this round.