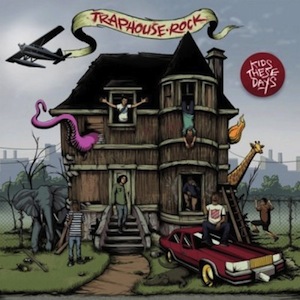 In today’s age of instant music sharing, kids enjoy everything from old Miles Davis records to new Chief Keef videos on Youtube. A seven-piece band including a horn section, female vocalist, and rapper, Chicago group, Kids These Days, embodies the modern listener who is hip on all that is dope, refusing to be pigeon-holed into a single
genre.

Starting out by jamming together in a basement, most members possess formal jazz training, which they blend with personal tastes for hip-hop, rock, blues, funk, and soul. On their debut album, Traphouse Rock, Kids These Days show off an ability to groove all over the place with an eclectic collection of songs including a few produced by Wilco’s Jeff Tweedy. A guitar solo over a jazzy piano rips open the record and establishes the band’s bluesy rock backbone. After an appropriate skit of a radio changing through random stations, the gritty lyrics and delivery of MC Vic Mensa shine on “Don’t Harsh My Mellow,” a banging track about student protests in Chicago that shows the potential of Kids These Days to create a unique lane in music somewhere between rap and rock. The weed anthem “Bud Billiken” is another standout with a booming chorus over big-band horns that can be dug by both fans of Kid Cudi and Earth, Wind & Fire. The influence of The Roots is obvious, especially on the seductive track, “Who Do U Love?” — yet this group of Chicago youngsters is clearly trying to do something different. Kids These Days are talented musicians who enjoy being young and creating a new sound that mixes musical styles from past and present.