ALBUM REVIEW: “Touch The Sound” by With Lions 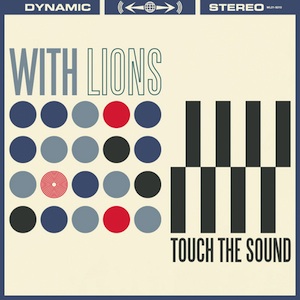 With Lions (Christian Celaya from NYC’s Benzos and Woody Ranere from Baltimore’s Lake Trout) have put out a large body of soundtrack work (with compositions numbering “in the hundreds”) in an impressively wide range of genres since forming in 2008. On Touch the Sound, the duo tamps down their experimental tendencies for five rock songs influenced by ’60s pop and ’80s synth-rock.

On the opener (the title track), the driving rhythms and soaring melodies wrapped in delay and reverb come a little too close to Arcade Fire territory, and the disc’s closer, “The Great Escape,” sounds like an escapee from an Echo & The Bunnymen album, including the vocals. But the middle of the EP is where things get interesting: “To Be” is a Phil Spector-ish wall of sound with a sci-fi synthy guitar squeal providing the instrumental hook and those huge drums. “Plans” is as sparse as the band gets, a lo-fi gem of warbly guitars and plaintive vocals. The real standout is “Leaving Me,” a wash of piano tremolo broken by glockenspiels, synth strings, and slide guitar. When the drums come in, it’s a beat that’s unexpectedly syncopated and twitchy. Celaya and Ranere take a lot of chances on this track, and it’s to their credit that all of their gambles pay off. This is With Lions’ home territory: despite the convincing straightforward rock sound heard on most of Touch the Sound, it seems that their creative energy is best channeled through the experimental music they’ve spent the last several years creating.