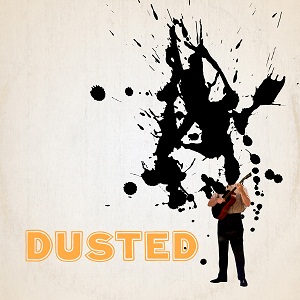 When you buy something from the record store, you stick it on whatever system you have and then start to hear erratic and absurd distortion — it’s difficult to estimate the record’s credibility. If you were told that the fuzziness was from poor production, the prejudgment would out-rule any potential likening for the album. However, if you were informed that the record had an extreme lo-fi effect due to broken equipment and the musician being content with that, you would listen to the record more lightly. The latter was Dusted’s scenario and they managed to – in some idiosyncratic and subtle blend – pull it off.

Brian Borcherdt and Leon Taheny casually execute the definition of lo-fi in a conspicuous demeanor in the first three tracks, which is bothersome to an extent.
“(Into The) Atmosphere” attempts to cross-blend this semi-country-folk jangle with lo-verb vocals and the grunginess of the lead guitar, stretching an arm too long and going wayward with the results. However, when the duo flows with a quiet psychedelia in “Low Humming,” the efficiency of their musical capabilities can be heard. That’s when the broken amp is more creatively adjusted to their objectives, allowing the rest of the album to be a pleasurable listen.

Everything after the aforementioned beckons a gradually softening set of tracks, with “Bruises” spewing a tasteful keyboard in the background – furthermore adding more zest to a surprising record. The general consensus is that it’s not a duo debut to have an orgasmic fit for, but we reckon there’s an innovative fuse within these two that is ready to detonate.

Dusted – (Into The) Atmosphere by totallyDusted