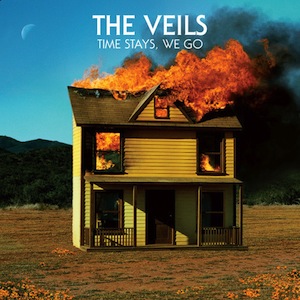 Let’s say this first — how wicked awesome are you if you can convince Bill Price (The Clash, The Jesus & Mary Chain) to come out of retirement to produce your album? The London quintet did just so for their fourth album release, Time Stays, We Go.

2011’s EP Trouble in the Brain was the first release after the band started their own label, but the last full album was 2009’s Sun Gangs. Frontman Finn Andrews (son of XTC‘s Barry Andrews) explains, “[The time off] has been mostly spent in London writing. We came off tour with Sun Gangs and decided that we had been on the road for too long and… we needed a little bit of time just being in one place for a while.” The music is undeniably The Veils, with that impeccable timing driving the chaotic arrangements and guitar hooks. First single “Through The Deep, Dark Wood” starts off with a ripping guitar and relentlessly drives you forward. “Dancing With The Tornado” sounds as if they are channeling the White Stripes with the drums and staccato lyrics. “Out From The Valley & Into The Stars” is the perfect closer to the album,

a traveler’s tale of love and loss set to a spare arrangement. We are in love with this album and believe we will go anywhere The Veils ask us to.