ALBUM REVIEW: “There’s No Leaving Now” by The Tallest Man On Earth 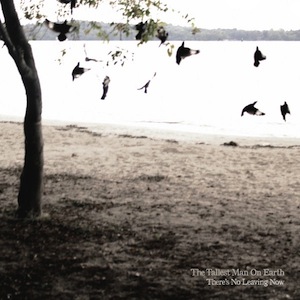 If you are yet to familiarize yourself with the charismatic storytelling of The Tallest Man On Earth, There’s No Leaving Now is a good starting point. You can then travel backwards through his catalogue of heartwarming vignettes and things will only get better.

The album opens with “To Just Grow Away”, which is Matsson at his best – the pint-size, stubbled Swede plucking at an acoustic and our heartstrings with the pure folk intonations of his characteristic lilt.

“Bright Lanterns” with bluesy lap steel guitar, and “Revelation Blues” with the welcome addition of flute are standout tracks. The title track is a sombre piano ballad akin to “Kids on The Run” from The Wild Hunt LP.

The production on There’s No Leaving Now is more polished than the rough edges of Shallow Grave. This doesn’t detract from the strength of the songwriting, which is at its most melodically comforting on single “1904”.

The now happily married troubadour has crafted an album of songs that are calmer than the frenetic “Honey Won’t You Let Me In” or yearning “The Gardner.” So long as this doesn’t translate to a simmering down of Matsson’s electric onstage presence, we’re ok with it. The best part of this release is the tour The Tallest Man will presumably be embarking upon soon. We’ll be first in line for tickets.