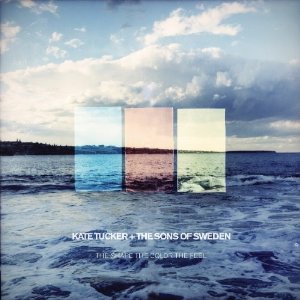 Ever watch a television show and a song clip comes on during some lame, dramatic moment and think, “man, that sounds pretty good – I wonder who that is?” (MTV actually answers that question on their reality shows as they scroll the artist and track name on the bottom of the screen.) You tend to think “if that little bit of song is this good, imagine what the whole album sounds like.”

I don’t bring this up because in the past Kate Tucker‘s songs (both by herself and with the Sons of Sweden) have appeared on numerous television shows, such as Pretty Little Liars, United States of Tara, and One Tree Hill. I state this because I feel on Kate Tucker & the Sons of Sweden‘s album, The Shape The Color The Feel, every song is catered to be plucked by the latest WB teen drama.

That is not to say this is a bad thing. Every song has a grand and majestic sweeping beginning. The dynamite production work creates a dreamy and ethereal ambiance where Kate Tucker’s gentle vocal work carries over these epic like tracks. It’s a very atmospheric album, where the music tends to soar and you get a sense there’s a lot of emotions and weight in what Tucker is trying to convey.

Unfortunately, because every track tends to share these similar qualities, it’s hard to differentiate between them at times, and as a whole album, you get lost in this atmospheric haze. If you are able to pull out songs individually, the two singles, “Looking Around” and “Hangover”, as well as the closer, “Island of the Misfit”, are primed to be featured on a prime time network show. They encapsulate all the elements you love in dream pop; breathtaking vocals over sharp and beautiful instrumentation that create a dreamscape ambiance. But overall, the album doesn’t contain enough hooks to hold the listener for the entire journey, but draws just enough attention to make you ask, “who was that band?”