ALBUM REVIEW: “The Ones Who Wait” by Denison Witmer 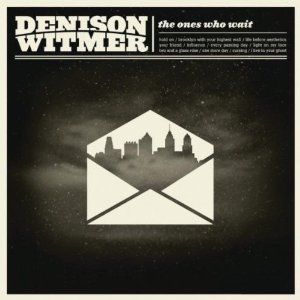 Denison Witmer
The Ones Who Wait
[Asthmatic Kitty]

Soft volumed and adorable, Denison Witmer is one of the best kept secrets out of Lancaster, PA. Popular on the internet for numerous other releases, Denison is back with The Ones Who Wait, which is on its way to being the sweetest release of the year.

For those unaware, Witmer’s voice is cathartic, calming, and warming. His voice sounds like home in a very unique way. The overall songwriting on the album is as grand as it gets with numerous rises that drag out songs to their peak. That being said, the album still has numerous stunners like “Hold On.” The opener to the album is a track about trying to hold on to a father in passing. It’s emotional and still upsetting, but Witmer’s stunning voice lifts the song from being depressing. “Brooklyn With Your Highest Wall” is also sweet, featuring lush vocals. Lyrics like “I was entering the calm/someone said there’d be a sign waiting on the streets/wait and see” provide an ambiance to the song. Relatable and simple, the track is a great example of Witmer‘s talents. Another highlight is “Light On My Face,” a toned down ballad about love. Lyrics like “I lay in the darkness/and you will be the light on my face” are so gorgeous and stunning all at once.

This sweet album is filled with the types of ballads fans will love. While some are more depressing than others, there isn’t a bad track on the album.