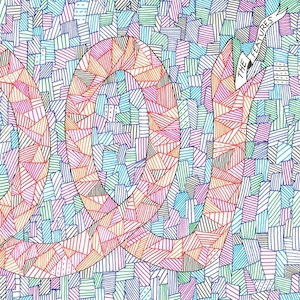 Formidable in his sharp-witted ability to turn a lyrical phrase while making a very pointed point, there goes Matt Pelham of The Features singing and slinging the contemplative contents of his brain (figuratively, of course) straight out of the gate with the deeply moody and shifty “Rotten.” You wonder where this train is going: keep wondering.

This is a band from the Nashville, TN area that is oddly notable for not particularly sounding like their point of origin and this self-titled album won’t change a damned thing about that. Oh contraire, homies, it firmly reinforces them as being so much more than “just” a southern rock band and that is a good thing.

Perhaps no song exemplifies this more than the Depeche Mode delivery and the new wave ’80s are calling/deep synth digs of “Ain’t No Wonder” and while your first inclination may be to cock an eyebrow and go, “Seriously?”- yeah, they are. Even though “Won’t Be Long” opens by leading you to believe some Led Zeppelin shit is about to happen, it mainly buzzes with such a fat bottom (we’re talking low end, people) and a tale of an angel/devil tug of war that you’re caught in that confused, “do I head bang and rock out? Do I get my groove on? Do I pray for salvation?” quandry where The Features always trip you up. More shimmery moments come from “With Every Beat” and “In Your Arms,” showing their restraint and ability to focus. “New Romantic” channels all things you love about The Kinks and Bowie (with a flash of Prince’s “Controversy” and we’re not complaining), all while pining for the way things “used to be” effectively employing a contradiction to, again, make the point. It’s what they do.

It’s the construct of the sharply grazing guitar lines, their fun and funky use of sound textures, playful cadences, Pelham’s flexible vocal styling and his penchant for deft and candid lyrics that never mean nothing (I don’t think the man even knows how to write a thoughtless song) that easily makes The Features that smarter, cooler, and musically more intriguing band that you are so gonna kick yourself in the ass for not getting hip to sooner. Come on, people; this is their fourth album. What are you waiting for?