ALBUM REVIEW: “The Archer Trilogy Pt. 2” by The Deer Tracks 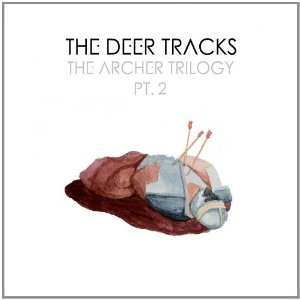 The Deer Tracks
The Archer Trilogy Pt. 2
[The Control Group]

So I’ve never been one for sequels. I still haven’t seen ‘The Hangover 2’, ‘Sex and the City 2’ made me want to go out and slap any woman wearing heels or fuchsia, and I cried when High School Musical 2 failed to live up to its predecessor. Basically, Part Two’s just have never been my thing. But my dread of the sequel may have just been obliterated by The Deer Tracks’ The Archer Trilogy Pt. 2.

This Swedish duo’s latest album is filled with ethereal beats animatedly layered to delight. The first track, “Meant To Be”, rolls in delicate tones and gauzy lyrics only to amp them up with tastes of electric guitar and a drum ‘n’ bass inspired tempo. Ever have one of those moments where you find yourself slightly dancing and you have no idea how that happened? Songs like these are to blame. While some tracks have a more electro-pop taste (Fra Ro Raa Ro Ra Fraa, Fall with Me) others take a downtempo turn (1000 Vanda Kinder, U-Turn).

David Lehnberg & Elin Lindfors have created a sound reminiscent of groups like Lali Puna and Ms. John Soda; indietronic with an experimental European take. If I was on a road trip in the middle of nowhere and woke up to take the 5:00 a.m. shift, The Archer Trilogy Pt. 2 would be the perfect accompaniment to my hazy-eyed wonderment and gas station coffee. With this new album, The Deer Tracks have definitely alleviated my hatred of the sequel. And to be honest, I’m kinda looking forward to part three.