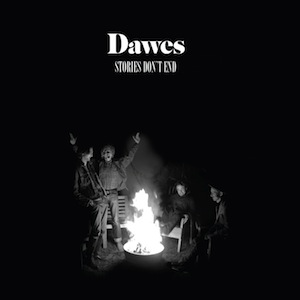 There’s something to the letter D and modern folk rock. You’ve got your Deer Tick, Delta Spirit and Dawes all rounding out a rootsy sound intent on grabbing heartstrings and laying the human condition bare. Since the front men from all three groups formed under the moniker Middle Brother in 2011, they’ve all released something or other with their respective bands… And Taylor Goldsmith’s main vehicle, Dawes, may take the cake for the best thing since then with: Stories Don’t End.

Dawes set themselves apart from the others with their cleaner, purer sound which never veers into the overly keen or precious. Every song by them is something you’d be confident you could show your father to rave reviews. Stories Don’t End, particularly, is an album shot through with the seventies singer-songwriters and Crosby, Stills and Nash-type bands which

soundtrack of our parents’ youth. Goldsmith’s lyrics are marked by a poetic clarity unmatched by many others in the contemporary indie folk scene. Musically, it’s nighttime music made for moonlit drives or bedside conversations. Here we have beauty, do with it as you please.