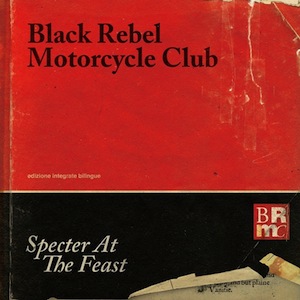 Black Rebel Motorcycle Club have built their image and sound around a consistent, rocking out in the shadows vibe. Specter At The Feast does not stray too far from this sound that we know and love. Despite the suggestion of the album title,

BRMC welcomes the emotions stemming from their sound man’s passing and uses them to fuel the slow-burning tempo of Specter. Michael Been (frontman for The Call and bassist Robert Levon Been’s father) was a major contributor to their fuzzy, psychedelic sound. They pay homage to him with a joyous cover of “Let The Day Begin,” The Call’s breakout hit from the ’80s. The down and dirty rock is still present in songs like “Hate The Taste” and “Teenage Disease,” while the tracks “Returning” and “Some Kind Of Ghost” slow the pace of the record a bit. Robert Levon Been and Peter Hayes still kick the jams into overdrive, and Leah Shapiro’s drums fits seamlessly into the equation.

On first listen, some hardcore BRMC fans may still yearn for the Howl days or even 2010’s thunderous Beat The Devil’s Tattoo. No one can blame them; our souls all crave a little pedal-to-the-floor rock and roll sometimes. However, the discerning listener will appreciate the band’s desire to branch out of a comfort zone and accept that the sound they’re known for may never quite be the same again.