“Somewhere Else” by Sally Shapiro 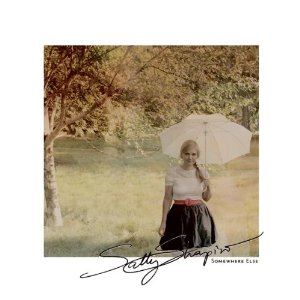 Swedish duo Sally Shapiro (which is also the pseudonym of its charmingly timid singing half) debuted in 2006 with Disco Romance, a wonderful italo throwback performed through
the lens of cozy Scandinavian indie pop. Its follow-up passed almost unnoticed three years later, packed with groovier yet less infectious tunes; this year’s Somewhere Else, however, comes as a “return to form” of sorts.

Giorgio Moroder’s shadow still lingers over these songs, but they clearly want to start seeing other people, too. “All my Life” introduces a younger techno beat, while “What Can I do” is Sally Shapiro’s most classically-Swedish, Cardigans-esque song as of yet. Album standout “This City’s Local Italo Disco DJ Has a Crush on Me” incorporates an electro-funk bass line that works great in the context of their ‘80s-rooted sound. Nevertheless, such spontaneous forays into neighboring territory might not be enough for the duo to appeal to a crowd they haven’t sold by now. Which is a shame, because Somewhere Else is clearly one heck of a good album.