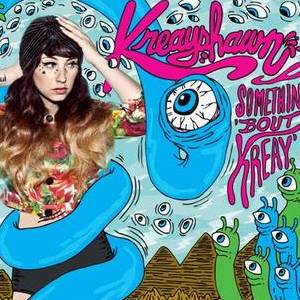 Remember when Kreayshawn first blew up with the insane viral success of “Gucci Gucci?” That was well over a year ago and yet after a successful tour and run of festivals, only now has Somethin’ ‘Bout Kreay been released. Of course, being true to the game, Kreayshawn‘s been releasing mixtapes and directing videos with just enough of an output to keep us interested. Even her unnecessary feud with Rick Ross kept us curious. Distractions aside, in thirteen cleanly-produced songs Kreayshawn has officially joined the likes of fellow Oakland partiers Wallpaper as strong examples of what’s to come from the Town.

“Blase Blase” starts with a Miss Elliot-style beat and kicks off the album with untouchable swag, flowing straight into the cough syrup dreamy “Ch00k Ch00k,” then that mega-hit “Gucci Gucci.” Of course, my favorite track on the whole album is the Diplo-produced “Twerkin'” that samples Katey Red’s “Where The Melph At?” and counts Sissy Nobby as a collaborator. As a NOLA girl originally hailing from the bay, it’s the perfect musical marriage of Bounce and Rap, with some unexpected bass drops and dub grooves thrown in for good measure.

Kreayshawn‘s almost over-layered vocals roll through like the fog and haze of a gravity bong hit and sometimes prove to be too much. “Summertime” is a little too sparse for Kreay to carry, but when she leans in and asks, “Hey, you want to be my best friend? I’m always looking for new friends!” on similarly minimal “BFF” you’ve got no choice but to giddily say yes. The song’s totally high school but that’s the point; Kreayshawn can reminisce with the best of them: just look at the hilarious “Left Ey3.”

If you’re looking for a strong rap-heavy album, you probably won’t find it with this White Girl Mob member. But who said the fun-loving swag Kreayshawn brought wasn’t kush? Party on, Kreay.