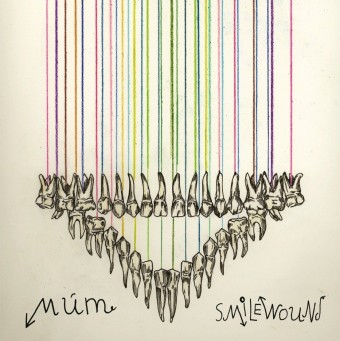 With the return of founding member Gyða Valtýsdóttir, Iceland’s múm have crafted an album in Smilewound that’s as fresh and sharp as their 2000 debut Yesterday Was Dramatic – Today Is OK.

múm rely on an electronic base where only slight percussion and strings make their presence known like in the opener “Toothwheels.” The types of beats vary – ranging from tin-tones and bell chimes, to the beeps, blips, and glitches that result in a playful atmosphere. “One Smile” is a full-on display of intricate polyrhythmic melodies that intertwine with a plucked bass and swift strings. “Eternity Is The Wait Between Breaths” and “The Colorful Stabwound” are simpler yet exquisite. The melodies are unique to the point where múm could create their own form of pop music.

However, things aren’t as cheery as they seem. As the oxymoronic title suggests, Smilewound is an album full of juxtapositions that only múm can beautifully craft into a cohesive whole. Despite the video game-esque synths in “Candlestick,” the imagery is nearly violent, while the desire for change uses a drastic metaphor in “When Girls Collide.”

With Smilewound, múm have shown that they’re one of the few bands to make an album that’s destructively beautiful.