“Small Fires” by The Stone Foxes 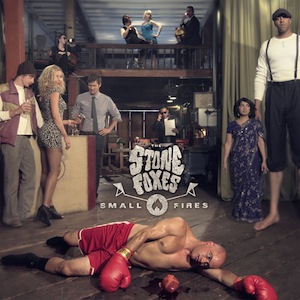 Journeying a long way since 2010’s Bears & Bulls, Small Fires is thoroughly drenched in sex, violence, and fervid testimony. This time around, The Stone Foxes have juiced their tell-tale hearts to hone their writ for this year’s provocative release through InGrooves Fontana.

The first single, “Everybody Knows,” is already accompanied by a vicious video dripping with gothic, backwoods Poe-ian imagery. Spliced between images of the Foxes rocking out are blood platelets in motion, a murder by vehicle, an escort failing to seduce a greedy CEO, and a beating heart pulled from underneath a wooden floor panel—and so, the objective correlative sets the gritty stage for the Foxes’ brilliant, formidable, stomping return.

While “Everybody Knows” certainly alludes to the complicated relationship between the blues and the sacrosanct (referenced before in 2010’s folklore-conscious “I Killed Robert Johnson” and “Beneath Mt. Sinai”), Small Fires as a whole also offers an introspective analysis on the nature of relationships, from the romantically twisted to the spiritually conflicted. From the wrenching, lonesome waltz, “Battles, Blades, and Bones” to the soul-tinged, grinding gospel-rock “Jump Into the Water,” The Stone Foxes cut no corners.

In the end, Small Fires out-rocks its predecessor—it’s raw and unfiltered—but its delivery is the most focused the Foxes have ever shown.