“Silence Yourself” by Savages 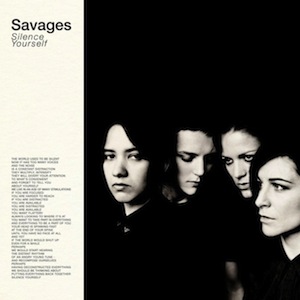 Savages raised eyebrows with intense sets at this year’s SXSW and Coachella, setting the plate for hooking up with Matador Records for the release of debut LP, Silence Yourself. The UK based quartet: Jehnny Beth, Ayse Hassan, Gemma Thompson, and Fay Milton, works the post-punk side of the street, using the dark underbelly of 1981 as a starting point to kick up a noisy attack all their own.

Lyrically and musically, it’s strident and confrontational, yet ultimately uplifting. A sample from the John Cassavetes film “Opening Night” kicks off, then plunges into “Shut Up.” “City’s Full” and the unflinching “Strife” continue the attack, descending into the gloom of “Waiting For A Sign,” before ending in squalls of expressionistic feedback.

“She Will” and “No Face” bring back the noise, and the bracing blast of “Husbands,” their first single, sets up the finale. “Marshal Dear” ends the LP on a dreamily unsettling note, serving as a benchmark to just how far they’ve come.

With a restless nature that includes room for collaborating with Japanese psych masters Bo Ningen, as well as an upcoming live date at Ministry of Sound, this is a band clearly determined to mark their own path.