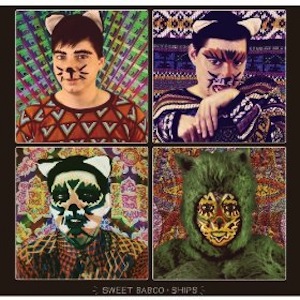 Ships is the newest entry in the canon of Sweet Baboo. Stephen Black, (aka Sweet Baboo), singer/songwriter/producer/all around man about town, taps into a line of Welsh artists stretching from John Cale to Super Furry Animals, Gorky’s Zygotic Mynci and Cate Le Bon. In between spending last year gigging around with Slow Club, he found time to follow up 2011’s I’m A Dancer/Songs About Sleeping with this whimsical collection of horn-spiked indie pop. It’s a kitchen-sink production, but pleasantly so, laden with an abundance of nautical references.

Leadoff track and new single, “If I Died Would You Remember,” kicks things off memorably, with the indelible couplet: “And Daniel Johnson wrote hundreds of great songs, and I’ve got six, so I guess I’ve got some catching up to do…” Throughout, his off-kilter view, (“The Morse Code For Love”), snaps you out of the lulling arrangements. “Let’s Go Swimming Wild,” an

evocative portrait of longing, was the leadoff single, and the Casey Raymond directed clip (viewable below) is what Black terms “a Louis Wain inspired psychedelic cat video.” Other winners are “8 Bit Monsters,” “You Are A Wave,” and the heartwarming closer, “Cate’s Song.” All told, Ships is a voyage worth taking.