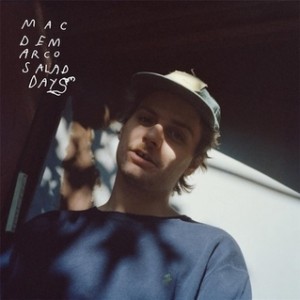 Vernor Winfield McBriare Smith IV, aka Mac DeMarco, puts all his cards on the table as he unleashes a beast of an album in the form of his third LP, Salad Days. And there is no denying the talent and strengths behind the singer/songwriter’s ability to create a catchy and almost stoner-like approach to his songs. His songs dwell within the realms of spacey folk guitar driven rock, relying heavily on creating a mind-bending approach to his folky tunes (imagine listening to Bob Dylan at the conclusion of a mind altering night of drugs and alcohol).

The album opener, titled track “Salad Days,” sets the perfect precedent for what the listener has in store, 11 tracks that will float amongst all the thoughts and sounds that this young Canadian can conjure up. “Let My Baby Stay” continues in the same fashion with Mac DeMarco carrying his heart on his sleeve with no need for spectacular effects, besides the basic guitar pedals that he implores to capture everything he’d like to demonstrate in a song. “Goodbye Weekend,” another prime example of the warped sounds that Mac DeMarco has easily coined as his own – “slacker rock” or “jizz jazz” as he so calls it. Just another reason for the masses to be excited of something creative and new coming from our northern neighbors. Mac DeMarco is set to to tour across the US in support of his latest full length Salad Days and if we were you, we would not miss the opportunity to catch this artist in small setting. It just may be your last chance.