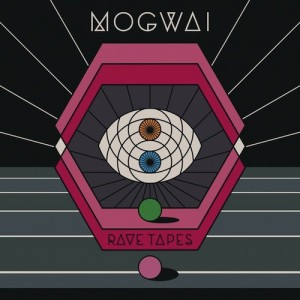 There was a time when the name Mogwai was largely synonymous with alternative rock and post-rock. The niche the Glasgow group helped pioneer (and popularize) informed a good chunk of cerebral, artsy music. Those days are long gone, obviously, but as instrumental rock’s most stubborn act, Mogwai are not quite ready to call it a day.

And maybe fortunately so, because Rave Tapes shows the band like we haven’t seen them in awhile: curious and exploring. After 2011’s Hardcore Will Never Die, But You Will, an album which – for the most part – sounded as if the Scots were covering a vague, distant memory of what their previous albums were all about. This year’s release finds the band more focused and desperate for change, on at least half of the tracks. The influence of working on the soundtrack to horror TV series Les Revenants is clear; Rave Tapes has got a strong cinematic feel and a progressive edge. The five-piece is experimenting with electronics again, making album standout “Simon Ferocious” recall the graceful drone-pop of Battles.

Which is not to say that the whole album sounds fresh and eclectic; “Master Card, ” for instance, is yet another unmemorable reiteration of Mogwai’s usual themes of heavy build-up and release, and “Blue Hour” – essentially another version of “R U Still In 2 It.” However, on Rave Tapes, the Scots don’t resort to recycling their own clichés that often, and when they go beyond their comfort zone, the results sound outright riveting and youthful.