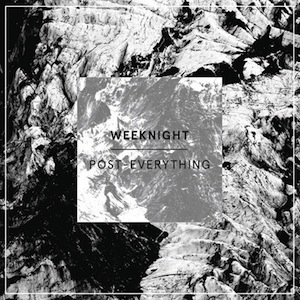 Titling a first album Post-Everything smacks of irony. In the case of Brooklyn’s Weeknight, though, the name works earnestly for their emotionally weighty debut. Throughout the album, Andy Simmons and Holly MacGibbon come dangerously close to being just another group wandering the melancholy world of bands like the xx and Chromatics. What sets Post-Everything apart, however, is the grittiness that flecks the sadness, the little touches that make the album’s heavy emotions sting a bit more.

The opener, “Hallowed Ground,” is just one example of the album’s tasteful minimalism. It’s a compelling texture, though many of these sounds–synths ripped from the ’80s, drum beats that echo for miles–are familiar and the pair’s gentle harmonies, while pleasant, may seem lacking in personality.

But there’s a unique edge to the album, present in the ghost-like noises that kick off “Tonight” and the fuzz that interrupts the bright synth arpeggios of “I’m The Beaches.” It’s an album unafraid to deal in dark moments; Lucifer himself even shows up on “Devil.”

Overall, though, the album’s darkness is doled out slowly and covered in a syrupy pop sheen. While Post-Everything may not be as apocalyptic as its title suggests, it’s emotionally penetrating, the soundtrack to a late-night, post-breakup drive.