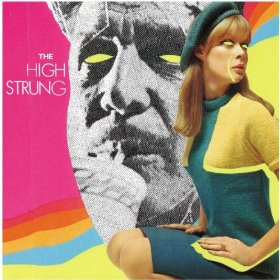 Detroit rock band The High Strung are known for putting out artistic, idiosyncratic albums, and with their seventh album ¿Posible o’ Imposible? they emphasize worlds and characters that are larger than life and pushing themselves (and the masses’ expectations of them) to the limit. We wouldn’t expect anything less from the band who toured for several years playing at libraries, infamously left their exhausted touring truck at the steps of the Rock and Roll Hall of Fame, and played to servicemen stationed at Guantanamo Bay. ¿Posible o’ Imposible? hits hard from the get-go, and the rhythm men Chad Stocker (bass) and Derek Berk (drums) bring a great intensity to guitarist Stephen Palmer’s rocking guitar chords and songwriter Josh Malerman’s distinctive lyrics.

“Rats Rats Rats” is the best example of the “Imposible”, describing a crazy off-kilter world where “there’s a job opening for a clerk at the Church of Satan”. The title track stands out with its pretty guitar solo and thought-provoking take on fame; “Hoping to make heads of all these visions we had / of what we could be / and who we could be”. ”On Your Way Up!” is the first single from the album and emphasizes the “Posible” in life – big wigs wanting to meet with you and good things coming your way. It’s no surprise that the Showtime show “Shameless” has 2006’s “The Luck You Got” as the theme song; The High Strung know that they’re going to continue to rock through the good and the bad, and, we hope, always through the former.