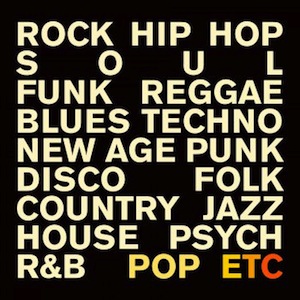 Pop Etc. offer up a healthy dosage of electro synthesized tunes overflowing with all kinds of “pop” sensibilities on their debut self-titled album. In case you were unaware of this, Pop Etc. were formally known as The Morning Benders (read more here).

On a couple of tracks, you can hear glimpses of their old selves, but this is an entirely new band with a new sound and direction. Where The Morning Benders used an indie rock platform with layers of vocal melodies and “pop” influences, Pop Etc. uses a pop base and build upon that with keys and more keys, which is not a bad thing for the most part.

Tracks like “Halfway To Heaven” show how the band are capable of engraving their tunes into your head — where one just can’t help but sing the chorus long after you’ve listened to the track. The songs that are plagued by autotune vocals are the most embarassingly gut wrenching. They’re not awful songs as far as the music goes, it’s the vocals that tend to ruin a few. If you can recall all the copycats that came out after Kanye West released 808s and Heartbreaks, and how much you hated everyone who used the robot-like vocals. It’s almost a clean 50/50 slate on tracks that follow this trend and songs that are just catchy as hell like “Everything Is Gone.” Regardless of those few tracks, this album is a solid effort from a band that knows what kind of sound they want to explore. It’s just a matter of time before Pop Etc. work out the kinks and perfect their sound.